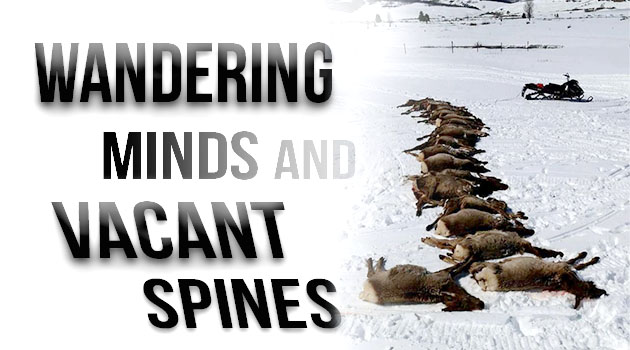 On a dark and snowy winter night last week near Bondurant, Wyoming a cruising pack of wolves mercilessly killed 19 elk in one single night. The argument that wolves only kill to eat was yet again debunked as pure myth by this wildlife atrocity. Very little was eaten from any of the dead and left to suffer near dead animals. Seventeen of the 19 elk were yearling calves, which represent a significant portion of the next generation of elk for this particular area. This is not the first time this type of killing spree has occurred on the Wyoming wintering grounds. The wolves continue to tear through our precious elk herds while those elk sit, vulnerable prey to the super predators, in belly deep snow with nearly empty stomachs, patiently waiting for the morning sleigh loaded down with winter relief.

A very sad situation indeed for Wyoming’s wildlife and residents, most of which enjoy the elk and the opportunity they represent to feed our resident families with high quality organic protein, rich with the nutrients that only the high country of such a great place can produce.

While 150 miles to the North in Absarokee, Montana a cousin pack to the Wyoming feed ground wolves takes down two pregnant angus cows in a rancher’s calving pasture right outside his home window. For this daring stunt, the Montana authorities recommend the possibility of a helicopter gun-down of the entire pack. Good for you Montana!

Even the USFWS knows that once a wolf pack learns to kill for sport and puts domestic stock on its list of prey, there is only one way to stop the devastation and that’s to fight fire with fire and a helicopter. The one thing some people in our country fail to realize is that it’s nearly impossible to reprogram a wild animal’s behavior. If a wolf or a grizzly bear kills a domestic cow, then cattle will now be viewed as a source of prey in that predator’s mind.

If you stop feeding Wyoming’s elk, they will die, plain and simple, period! Those elk have lost their ability to migrate up and over and out to the desert with the deer a long time ago.

It pisses me off to no end that in Montana the government will gun down an entire pack of wolves for killing two angus cows, while in Wyoming our wolves are allowed free reign to rip through our large ungulate herds like a chainsaw through butter and we, the sportsman of Wyoming, have to sit back and watch as our elk and moose herds are completely devastated nearly beyond repair. I realize there is a difference between elk and angus cattle, I get it, I come from a Wyoming ranch family. There is certainly a difference between public property (elk) and personal property (angus), I get that too. But, you know what? I am sick and tired of the spineless bureaucrats down in Cheyenne sitting on their hands, writing letters back and forth to the Federal USFWS pleading for relief from the wolf and grizzly bear only to get a letter back stating some meaningless, bureaucratic B.S. rule in the ESA for the excuse as to why nothing can be done. Enough is enough already!

The “Predatory Death Spiral” has arrived in Wyoming and the financial effects will be devastating to our Game and Fish Department. There is no fossil fuel industry to fall back on anymore folks. The federal government and its ridiculous regulations are about to rip the financial guts right out of our state!!! There isn’t enough action or Super Tags on the planet to stave off the financial destruction that is about to harpoon our Game and Fish Department’s budget. We need to do something now! A change in leadership is required.

If Colorado and Washington can thumb their nose at the Federal Government and legalize marijuana I don’t see why on earth we (Wyoming) cannot figure out a way to re-legalize the control of wolves. There are ways, trust me there are ways, just ask Governor Butch Otter of Idaho!!!!

Our state government has completely lost its spine and the rest of America, as we all know, seems to have lost its ever-loving mind.

Following in the footsteps of his father, Guy has taken up the reins and is now at the helm of the Eastmans’ Hunting Journal and the Eastmans’ Bowhunting Journal. A fine hunter in his own right, Guy has taken several trophy animals and has become an expert in trophy hunting as well.
Previous Death By Coyote: Baby Cow Murdered
Next World-Class Buck Poached: Jail Time?