The next predator battle is here and it’s not going to take long for this one to heat up.  Grizzly bears have recovered in Yellowstone according the Interagency Grizzly Bear Committee and have healthy populations from Northern Idaho all the way to the Wind River Range in Wyoming. Montana is even taking the next step and has a management plan approved for the southwest portion of the state. News of other states gaining approval for their management plans will happen in the near future. 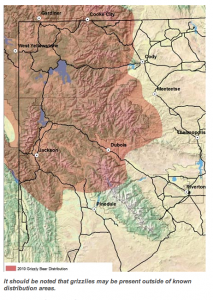 Other areas are subject to localized rumors of grizzly bear populations without public documentation from biologists. As is the case with wolves, where there is smoke, there is fire. Announcements of growing populations coinciding the rumors will happen over time.

So where does that leave us as hunters? Every serious big game hunter would love to have a grizzly bear rug in the house and if it comes from their own backyard- even better! However, seasons likely won’t happen soon if we follow the same playbook we used to de-list and establish wolf-hunting seasons. This fight has the potential to be just as messy as the wolf battle and for good reason. Grizzly bears are slower to repopulate and are considered a success of the Endangered Species Act.

The real question to ask is “Are grizzly bears in the Yellowstone ecosystem really endangered now?”  That is where the battle lines will be drawn and every available resource will be spent to prove one side or the other right. If the 2007 attempt at delisting is any indication, plan on learning anything and everything that is important to bears.  That attempt at delisting brought about a study of white bark pine nuts and how dependent grizzly bears are on them as a food source.

The bottom line is that the Interagency Grizzly Bear Committee has recommended grizzly bears be removed from the Endangered Species List. How long it will take for this to materialize and hunting seasons to be implemented is another question entirely!

Following in the footsteps of his father, Guy has taken up the reins and is now at the helm of the Eastmans’ Hunting Journal and the Eastmans’ Bowhunting Journal. A fine hunter in his own right, Guy has taken several trophy animals and has become an expert in trophy hunting as well.
Previous Guy’s Top 5 Wyoming Picks – Deer and Antelope
Next A Strategic Key for Killing Mature Deer