Of Wolves, Bears, and Birds 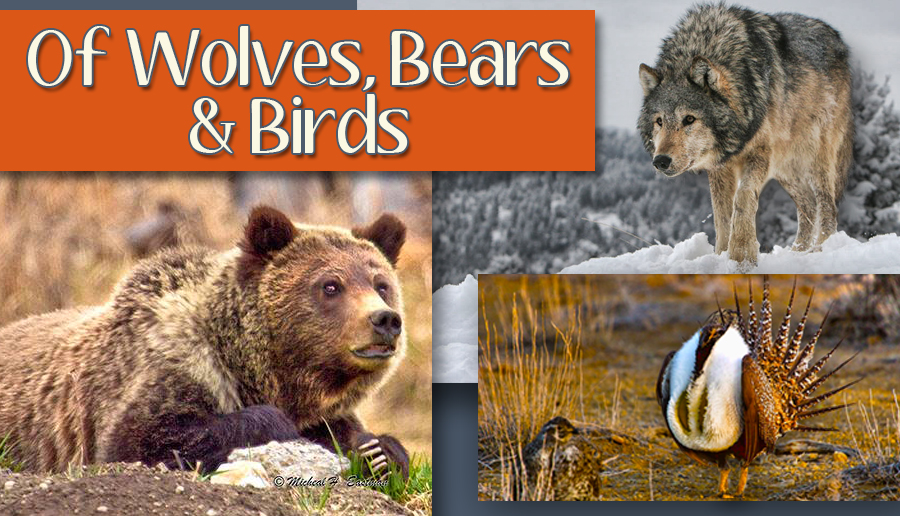 On a scrabble board the word regret will only yield you seven measly points, but in real life regret can come with an enormous price tag. In 1991 when my phone rang in my Indiana dorm room the voice on the other end of the line was a reporter from my local hometown newspaper, the Jackson Hole Guide back in Wyoming. The gal wanted to know about a report that I had seen a wolf at the top of Togwotee Pass late one snowing blizzard of a night while I was home for Christmas break. At that time, the wolves had technically not been reintroduced to Yellowstone, but reports about wolf sightings had been circulating around the area and I’m sure the reporter thought I was just some snot nosed college kid who wouldn’t know the difference between a wolf and a bulldog. The dead air on the other end of the line was nearly deafening when I explained to her that I had grown up with wolves at my grandfather’s house down near Wilson where he had a compound with about a dozen of the Canadian beasts under captivity. What I saw that night in my headlights was without a doubt a big Canadian Gray wolf with an orange radio collar around its neck, no question about it. Most of the people who read the article doubted my account of the sighting, and that’s okay. At the time I just laughed it off and went back to proving some ridiculous thermodynamic law.

Those were different times. They were, let’s call it BWR, “Before Wolf Reintroduction.” There was a lot of apathy in the hunting community during that period. Some hunters and outdoorsman thought wolf introduction might even be a good idea, and some vehemently despised even the mere thought of the idea. I found myself in the latter category of course, but calculus and trigonometry dominated my spare time at that point in my life. I think we can almost all agree, that we should have done more; more as hunters and outdoorsman to try and push our politicians to stop the largest wildlife genocide in over 100 years. To think that we now have an entire generation of hunters now living among us that has never set eyes on the type of elk and moose herds that we enjoyed during our childhood is very sad. We should have done more, stood together, spoke up as a unified front against what was about to happen. We now know all too well that our politicians even at the state and local levels don’t always have our best interests in mind when it comes to sound wildlife management. They say they do in speeches, press conferences and newspaper articles, but when push comes to shove the federal government always seems to get what it wants.

The politicians and bureaucrats know that if they can control the top of the food chain they can control everything. The Endangered Species Act (ESA) is being used as a weapon to potentially destroy our hunting heritage. Wolves, bears and soon to be birds, are now being shopped by “green” groups to be included on the endangered species list in an effort to gain political control over massive tracts of our public lands, public wildlife and accesses. What they have learned from the wolf situation is now being ramped up and expanded into other species, using the wolf reintroduction as a template to control hunting, species management and access to vast amounts of our public lands.

The sage grouse is the next piece in the puzzle for the feds and the animal rights groups to further limit our access and sport. If you look at the wolf and grizzly bear recovery area map and overlay the proposed sage grouse recovery area, you can easily see they fit together like a glove. The sage grouse habitat area will encompass most of what is thought to be some of the best mule deer habitat on the planet. Make no mistake about it, listing the sage grouse as endangered species would have disastrous effects on western hunters and recreationalists. This “power grab” of our precious wildlife resource is nothing more than politics as usual, pure and simple.

Are the sage grouse numbers down substantially throughout the West? Yes. Does something need to be done to help the grouse populations rebound? Of course it does. Is the federal government needed to make this happen? Hell no. Like the great Ronald Reagan once said, “The scariest words in the English language are: Hi, I’m here from the Federal Government and I’m here to help.”

The state game and fish agencies are perfectly capable of bringing back the grouse numbers to a more than sustainable level. Sound science has shown that the sage grouse numbers are on a significant down cycle right now, but as most of us are aware this is a not so uncommon occurrence when it comes to game bird populations. Wyoming, and much of the West for that matter had one of the worst winters on record in 2010, which was then followed up with the single driest year on record in 2012, this one-two punch sent most of our wildlife herds into a temporary death spiral, and the sage grouse was certainly no exception. Add to that the fact that there is a raptor sitting on nearly every other fence post during the winter months and a wind farm growing on nearly every ridge in southern Wyoming and we have had the perfect storm for struggling game bird populations in the West. By most of the government’s own numbers these birds are on the rebound already, no federal oversight required. I personally had to slam on the brakes four different times last fall on a single hunt to let sage chickens cross the two track I was driving on while looking for deer. Either I am the luckiest guy in the world or the sage grouse is not quite as endangered as some may be leading us to believe.

But this proposal is less about birds and wildlife and more about control. This is purely political and we have been down this road before nearly twenty years ago. The ESA is where wildlife species go to die, and once listed, animals are almost never removed. Caught up in endless loops of regulation and litigation, they become like taxes, used as leverage for control over state agencies that are often deemed inept by a Federal Government that has an insatiable appetite for control and is easily scared into the realm of illogical and desperate actions by well funded and well oiled environmental organizations with political agendas. It is time for us as hunters, anglers and outdoor enthusiasts to stand together and be heard as one uniform voice with a steady and consistent message. A message that says we have been down this road before and this did not work in the past and it will not work in the future. It’s time the government and these so called green groups stop using the ESA as a weapon to remove our access and opportunity to “OUR” public land and public wildlife resources. If there’s one thing our politicians and bureaucrats are deathly afraid of, it’s the general public-us, you and me.

The first step in this process is the signing of a petition to stop this process in its tracks. I have news for those pushing for this “hostile” takeover of our state run wildlife resources: I already passed those math classes and this time I’m not going to sit back and “trust” politicians and bureaucrats to do the right thing when it comes to our precious wildlife resource. My kids and grandchildren will not have to live with the consequences of my regret this time.

As a sportsman, you have the opportunity and duty to make your voice heard by those who represent us in Congress. Big Game Forever, an organization founded to preserve states’ rights to manage wildlife, and dedicated to hunters’ rights has been on the cutting edge of the wolf issue, and is now on the front line in avoiding a federal listing of sage grouse. Please take the time to hit the link below for an easy one step petition signing. Hopefully through efforts like this we won’t see our public lands become the subject to activist judges or politicians who would sell us out to keep their position. Our collective voices matter and when we politely remind the people in power that we vote it stands out. It takes efforts like these to make a difference preserving all of the things that we value here in the West.