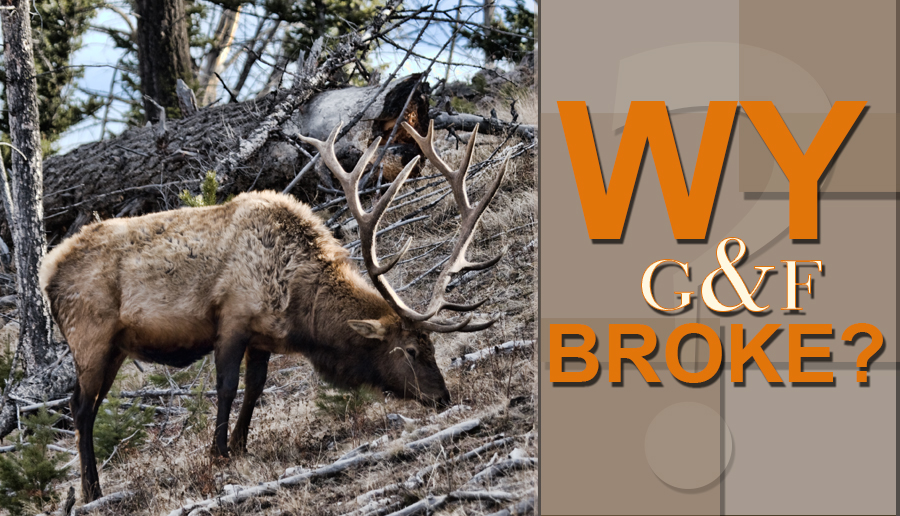 “The wolves, cougars and grizzly bears start to take a few more elk and moose each year as their unchecked populations grow and expand. The state does not react at first with cuts in the tag quotas. This would mean a decrease in revenue that would have to be met with either more tags somewhere else or even worse, budget cuts.” –From The Predator Death Spiral

Now that the dust has settled from all of the draws and commissioner tags, auction tags and lottery tags have been handed out, we are starting to get a picture of how the budgets look for the different game management agencies across the West. Wyoming is in a situation where they are on a full-court press to come up with revenue and it could prove to be an uphill battle.

Knowing that information, it is easy to assume that they will eventually end up examining license fees across the board, which always seems to end up in a fairly contentious fight. In 2013 a license hike was denied across for the first time since 1937. Asking people to pay more for a product they have been accustomed to paying one price for, for a long time always ends up in a battle.

At the heart of this fight is the thought that waste could be cut from the budget of the WYG&F before we ask residents and non-residents alike to pay more for hunting opportunities. The Access Yes program as well as the feed grounds seem to be places that have the crosshairs planted squarely on them.

By my logic this doesn’t seem to make much sense. The key to having a successful Game and Fish agency in any state is to offer a great product that people want to hunt! It is absolutely no secret that our elk herd numbers in the bull elk factory of the northwest portion of the state have gone way down, which means fewer tags to distribute to residents and non-residents alike. Moose populations are as low as I can remember and the size of the herd I remember growing up isn’t likely going to recover for a VERY long time.

The solution to me is really simple, let sportsmen and women hunt wolves and grizzly bears. There is absolutely no reason for us not to be managing their populations! This may sound simplistic but it is the plain and simple truth. Wolf tags mean revenue and fewer wolves means larger elk herds which turn into more available tags that can produce, you guessed it, more revenue.

Grizzly bears are way past their original ESA objectives and we would be hard pressed to find anyone who spends much time in the regions they call home who hasn’t seen their fair share of them. Grizzlies spend much of their spring season following elk and moose cows waiting for an easy meal on their calves. So, the solution is simple, get them off of the ESA and we can manage them. This will turn into, you guessed it, more moose and elk tags for the WYGF to sell which means more revenue.

Instead of being able to manage them and turn them into a source of revenue for the WYGF we see that it turned into a huge hole in the budget that the Wyoming General fund is now paying for. So the fine people of Wyoming are footing the bill for an animal that is fully recovered and growing at a far more rapid pace than we would like to admit. They are also moving further and further from the wilderness areas, we are talking about five miles from the doorstep of Cody Wyoming.  If the feds want it here, they should be paying for the state’s losses from the animal as well as the costs associated with taking care of it.

If we want to avoid these budget cliffs and political gamesmanship every year with the WYGF budget, the solution is really simple. Put more animals on the mountain that we can hunt and lets get these predators off of the ESA to be managed like the rest of the animals our dollars support!