Trump Administration Opening up 2.3 Million acres to Hunting and Fishing 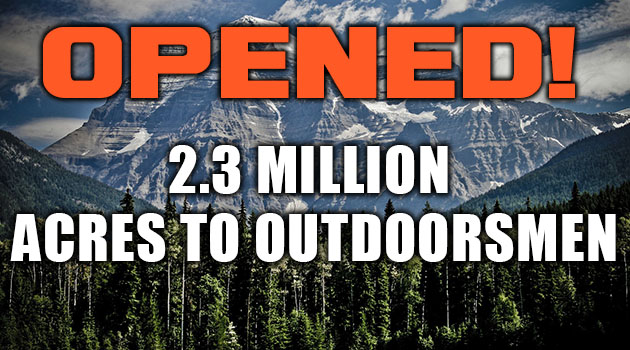 Have you ever visited or traveled through a wildlife refuge and found it is closed to hunting and fishing? Or maybe it’s open to waterfowl hunting but you can’t shoot turkeys or grouse? I sure have and it always left me scratching my head. A large portion of wildlife refuges are waterfowl production areas and some can be hunted, but also have plentiful resources of big game and fishing that have been untouched for decades. The Trump administration analyzed all the refugees across the county and took a look at what was closed and what was open and for what reasons. They found many areas that could be approved upon and came up with about 50 from all over the country.

What refuges are going to open you might ask? There are more than 100 of them across the country from Bombay Hook in Delaware to San Diego Bay in California. For a full list of the refuges that are opening click here. Four in Wyoming, two in Montana, three in Colorado, and two in Idaho. Washington leads the pack with seven new openings. A lot of the openings just make sense, for example, Hart Mountain Refuge in Oregon will open to waterfowl and expand upland game bird hunting to new areas already open to other hunting. And then you have other refuges like Fallon National Wildlife Refuge in Nevada that is going to open migratory bird, upland and big game hunting for the first time. The opportunities this is going to create for sportsmen are unprecedented and a huge win for the conservation world. There are even three refuges in Georgia, Texas and South Carolina that will be open to alligator hunting for the first time. These are just to name a few. Once again, check out the link for the new openings in your state.

As you can expect there is opposition from environmental groups that claim the administration is trying to make up for the areas that it deregulated, like Bears Ears and Grand Escalante, for public use and possible energy exploration, however, most folks are in favor of the regulation change. Ducks Unlimited CEO Adam Putnam said in a statement the timing is perfect since Americans hunkered-down during the pandemic are looking for more areas to recreate.

I would rather see our public lands be opened for “we the people” to use rather than be off-limits to recreation. Money used to run these refuges ultimately comes from you, the taxpayer and even more-so, hunters and fishermen. Hunters and Fishermen are the most taxed and prodded for cash of any group in the outdoor recreation industry and are the true conservationists.

Well, that’s my opinion, what about yours? What do you think of this opening up move on refugees across the nation?