Trending Posts
Home / Bowhunting / To Snow or Not to Snow?

To Snow or Not to Snow? 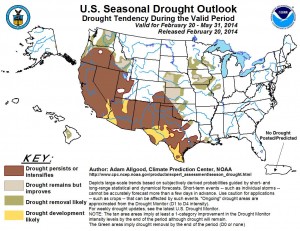 Dr. Jekyll and Mr. Hide, feast and famine, take your pick which analogy you like the best to describe the conditions across the west. It may take more than April showers to bring May flowers in parts of the west. According to a Natural Resources Conservation Service report there are measuring stations in California, Nevada and Oregon that don’t have any snow. No snow means spring grass and undergrowth will be at a premium in the higher elevations.

As a hunter this is something to pay close attention to on multiple levels. Low grass densities mean less antler growth throughout the summer. A bull elk needs early moisture to produce good fronts and late-summer showers to develop the top end of his rack. If you are planning to burn points in any of the areas mentioned in the study, plan accordingly. With this in mind, you’ll also have to have realistic expectations of trophy quality in the areas you plan to hunt.

These types of conditions make summer scouting even more critical than in previous years with normal precipitation. Ungulates, particularly elk, will spend more time closer to water and therefore knowing their patterns and watering areas will be crucial for fall success. If you can’t get boots on the ground, take the time and call the biologist in your unit to find out just how bad it is.

It is also important to note that these low-snowpack states will have another summer with high fire danger. Fires can change a particular unit’s outlook in a matter of hours, meaning your hunt will be much different than planned. Animals don’t always leave a burned area but it will be important have several backup areas in mind in just in case.

In sharp contrast to the drought, Wyoming is well above 100% of normal in every area but one. Snowpack in the Rendezvous Bowl at Jackson Hole Mountain Resort was 121 inches as of last weekend, the most snow at that time of year since 1997, according to The Associated Press. Colorado will meet normal snow pack in half of their districts and will be close in most others. Montana is at 76% of normal on average statewide. Idaho is in good shape with most basins approaching 100% of normal and most of the others have plenty of time to reach it, with two more months of snowfall possible.

In these states, we should see great early and late antler growth with plenty of green grass that ungulates need. For elk it will mean strong fronts and with a little luck, some late-summer showers will provide great tops.

What all this means is study the conditions carefully in the areas you plan to hunt, as it could make or break your season!