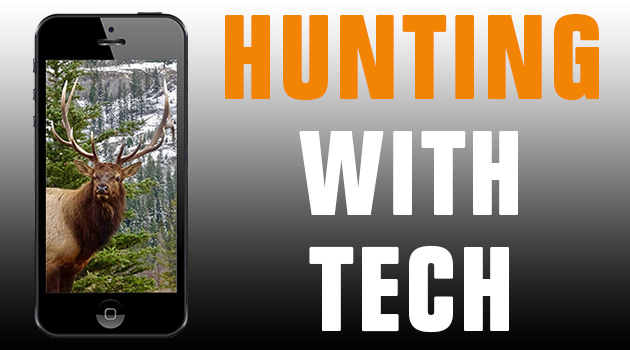 Technology. When you stop and think about it, it will blow your mind how much all of our lives have changed recently, thanks to technology. How we communicate, how we travel, work, recreate, even something as simple as me putting this to “paper” so to speak. For better and worse, it effects every one of us. There really is no escaping the ever evolving technological advances.

Hunting is no different. Unless you have been living under a rock, technology has changed hunting dramatically. Long gone are the days of open sight 30.30’s, military surplus gear, even something as simple as a paper map isn’t as common as it was in the not so distant past.

The other day, I was talking with a young man that is new to archery. We got talking about estimating and calculating ranges, shooting uphill and downhill. I told him when I was learning to shoot, no one I knew, even had a rangefinder. We both laughed and I’m still not so sure he believed me. The crazy part, I am only 35 years old, and the period I’m referring to is the 90’s. Talk about making me feel old, and it really got me thinking, rangefinders are ancient technology compared to what we have now.

Technology is a fairly common debate among hunters, from the local coffee shop, to social media platforms. There are strong opinions on all sides. I think respectful debate is a good thing, and is something we should continue to discuss if we still believe in fair chase at our core. Often times, however, it brings up more questions than answers.

In 1887, the father of Conservation, Theodore Roosevelt along with George Grinnell, founded the Boone and Crockett Club. The club promoted ethics and sustainability, a foreign idea at the time. The Club introduced the idea of Hunting Fair Chase and the North American Model For Wildlife Conservation. These ideas are without doubt the reason we enjoy abundant wildlife across North America. They are the reason we are all able to pursue game today and the reason wildlife is owned by the people. It is very important we remind ourselves how impactful these ideas are.

A lot has changed since the days of Roosevelt. Technology seemed to ease along, small improvements, as it always has since the beginning of time. Then came the introduction of electronics and computers.  It changed everything, things like GPS handheld technology, trail cameras, laser rangefinders, two way radios, cell phones, even ATV’s are all fairly new if you really think about it. Just 30 years ago, your average hunter didn’t use or even own any of these things.I think today you would be hard pressed to find a hunter without a pocket and a pack full of technology.

Even more recently, came The War on Terror. Since the beginning of man kind, nothing increases technological advances like war. Naturally, war technology has obvious bleed over to hunting. These improvements come at an unbelievable pace. Clothing, weapon systems, satellite imagery, introduction of drones, infared and thermal technology. Many of these have been implemented to locate and pursue game. Things like infrared and thermal, an almost brand new technology, can be used to exploit an animals ability to move about the landscape under the cover of darkness. Sometimes they are used just to locate a target animal, and learn their habits. Other times, its putting the user in the perfect position as it gets light to “legally” take the animal during normal shooting hours. A lot of people, don’t even realize this is happening. But I assure you, its being used, even out west. There are no laws prohibiting it in many states.  Trail Cameras, thousands of trail cameras, some with cellular transmission are being implemented.  These cameras can send live updates to the users cell phone. 24-7, 365 days a year. These are just a few examples of things that need to be discussed.

I think about how much has changed in 30 years, and I question how much it will change in another 30. I ask myself, how far are we out from a real time satellite feed, a user wouldn’t even have to leave the comfort of the couch to scout and locate game? Will we still consider it hunting? Ideas that seem foreign or near impossible are literally coming to life before our eyes.

It would be difficult to argue against the fact that advances in technology have made hunters more efficient. You could argue technology has made us more lethal, accurate, and comfortable.

My question is where do technology and ethics meet. When and How should hunters regulate, if at all?

I believe as hunters, we must realize, as we become more efficient and use these ever improving technologies, our advantage increases, while the game we pursue chances decrease. It is my opinion, we have to draw a line in the sand. But where? I don’t think anyone would argue that we go back to hunting with spears. In reality the answer likely lies somewhere in the middle.

In recent years, some states have been addressing UAV/drone technology, electronic communications, ATV’s, and even more recently a number of trail camera restrictions and proposals. When state agencies make these proposals it is common for some hunters to have a negative reaction, upset, feeling like hunting is under attack. I think it is important to remember, we have to self regulate, and support fair chase laws and regulations we agree with.

I encourage all fair chase hunters to self-reflect and review the definition of fair chase given by the Boone and Crockett club.

“Fair Chase as defined by the Boone and Crockett club, is the ethical, sportsman like, and lawful pursuit and taking of free-ranging wild game animals in a matter that doesn’t give the hunter an improper or unfair advantage.”

I worry, as we head down a path farther and farther, it gets more difficult to turn around, if not impossible. I think as sportsman, we have to be more proactive and continue to fight for Fair Chase Hunting. The importance can be easy to forget, and overlook. In a world with less and less support for hunters, ethics is what keeps the “non-hunting public” support for a tradition that is as old as time. The principals of Fair Chase and the North American Model For Wildlife Conservation has kept these animals around for generations, and hopefully for generations to come.