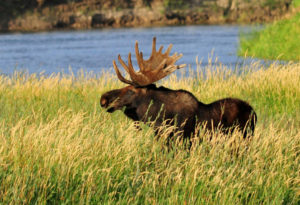 Colorado’s moose herd has taken over Wyoming’s, but what does that mean?

There is plenty of blame to go around and a multitude of reasons. Most blame wolves and grizzly bears for the drastic decline, however that is not the entire story. Wyoming Game and Fish Deputy Wildlife Chief, Dough Brimeyer says, “predators have played a role in Wyoming’s changing moose population, but other factors – such as drought and malnutrition – also are in play.” Doug is one of the best wildlife managers in the West in my opinion, a true advocate for big game hunters in the Cowboy State.

There are certainly more factors at play for this decline but predation is at the top. The good news, Wyoming is seeing some very solid cow/calf ratios over the past few years hitting the ground. In many areas, cow calf ratios of nearly 50/100 are being recorded which could be a big step in the right direction for the future of Wyoming’s moose herd. As the drought conditions subside, and habitat improve our moose could further drift down the road to recovery.

Colorado’s moose herd went from 2,500 animals to over 3,500 in six years, making a massive rebound not completely out of the question for Wyoming. If you are applying for moose out West, the fact remains; both Wyoming and Colorado should be on your list.

This past fall I hunted deep in the backcountry for elk, in a closed moose area. We spotted five moose over the course of a week including one very large bull. Let’s hope this trend continues into the future.

Losing to Colorado can be a tough pill to swallow for some of us. Time will tell.

Following in the footsteps of his father, Guy has taken up the reins and is now at the helm of the Eastmans’ Hunting Journal and the Eastmans’ Bowhunting Journal. A fine hunter in his own right, Guy has taken several trophy animals and has become an expert in trophy hunting as well.
Previous Price Hikes Coming to Wyoming- Maybe
Next 10 Most Common Big Game Violations: Part 2