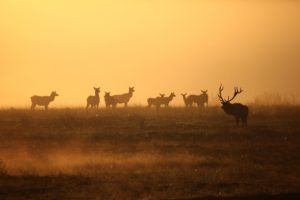 If you keep the carcass whole, you’ll have the head and genitals still attached.  If you skin it out on a meat pole but keep the head on there’s no need for the other evidence of sex.  With the head still attached to the carcass, you don’t need any other form of evidence of sex.  The issue comes into play when you take the head off and are quartering out and especially boning out the meat.  If you removed the head or antlers, the evidence of sex in the form of the testicles, penis, scrotum, udder or vulva must remain naturally attached to a quarter, or a portion of edible meat if boned.  That evidence of sex must stay attached until it reaches the final place of storage or consumption, or a meat processing facility.  In any case, the horns/antlers must accompany the meat while in transit.

For bear, mountain lion and wolf, things are a bit different.  In Idaho, you are not required to bring out any meat from a bear, lion or wolf.  For these three, the external evidence of sex must be left naturally attached to the hide until it’s checked in at a Fish and Game Office or with a Game Warden.  It’s a requirement for all bears, lions and wolves to be checked in with Fish and Game within 10 days of the date of kill.  You must present the skull and hide with evidence of sex attached to Fish and Game so they can pull a premolar for aging.  They will also place an export tag in the hide.  If you don’t want to bring out the entire pelt, skin a strip of hide about 6 inches wide all the way down the back until you reach the evidence of sex.  Go around the evidence of sex and bring all that out with the head still attached to that strip of hide.

In units where there is an antler requirement (Spike or Two-Point season), you must leave the antlers naturally attached to each other.  If you skull cap the deer or elk, those antlers must be unaltered.  Be careful because I’ve seen on several occasions, skull caps break right down the middle.  There is a cranial suture that runs laterally between the antlers and without the support of the rest of the skull, it’s easily broken.

For areas that have both mule deer and whitetail, you need to make sure and leave evidence of species.  If the head is removed from the body (quartering out the deer), you must leave a fully haired tail naturally attached as described above along with the evidence of sex.  This only applies if there is a season/tag that is restricted to one of those species.  For instance, if you have a whitetail only tag you must leave that tail attached.  It’s the same if you have a general tag but the season you are hunting is for whitetail only (i.e. Unit 5 Oct 10-Dec).

This is a lot of information, and you can see why this is one of the most common violations that Fish and Game sees.  Make sure you don’t think about this after the fact.  Don’t be scared to quarter out your game, be informed and don’t rush when processing your animal.  It’s easy to get going fast and not leave evidence of sex.