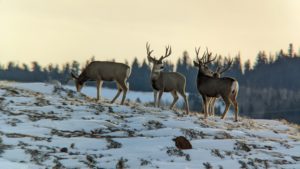 Update: This bill did not pass…but this is a good idea of what could happen in the future.

A bill pending in the Wyoming legislature would seriously hike the price of nonresident tags.

Wyoming Senate Bill 60 would reaffirm the two tiered pricing structure that Wyoming currently operates under for nonresident deer, elk and antelope tags with a 60/40 split, 60% for the “regular draw” priced draw while the remaining 40% is set aside for the “special draw” pricing, the big bucks and I don’t mean buck deer. The bill would significantly change the pricing structure for the “special” draw tags.

The new pricing would keep the “regular draw” tags the same as they have been ($692-elk, $374-deer, & $326-antelope) for the better part of a decade, a clear win for nonresident budget hunters. However, the “special” draw tags would be priced at a beyond special rate, with one increase clocking the Richter scale at almost 100% the current rate.

Proponents of the measure say it will bring Wyoming’s nonresident fees more inline with neighboring state’s fees and prices. I personally think it is an attempt at differentiating the two cost structures in the draw process. As time has gone on, the regular and special draws have come to parity in the odds of drawing and even flip flopped in some cases with the more expensive special tag actually becoming harder to draw than the corresponding regular tag. This has caused some serious heartburn for state draw and application specialists.

In my opinion, the state Game and Fish statisticians continue to under estimate the financial horsepower of those using application services to apply for a massive amount of nonresident big game applicants. The way these app services structure their business models, money is almost no object because the applicants is not actually fronting the money. A $6,000 sheep application in New Mexico is no big deal for these folks.

The bill would also increase the authority our game wardens have to write trespass tickets in the field- a direct result of the “corner crossing” issue that is currently working its way through the court system.