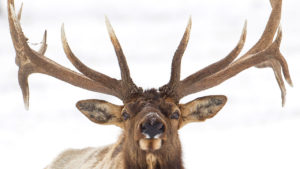 If you’re on social media you probably have seen posts the last couple weeks of elk heads being stolen out of the back of trucks at hotels and out of backyards while being boiled for a European mount. There are a lot of “dirtbags” out there and elk antlers, especially big bulls, are worth hundreds of dollars.

Brown elk antler hit all time highs of $20 a pound in 2022 which makes a 340 bull worth about $400 if each antler weights 10 lbs and is sold for its raw weight. Antlers sold for display can fetch for even a higher price to the right person. When the economy is poor, theft seems to rise as people get sneaky and desperate.

Make sure to always lock up your antlers and trophies at night and at least secure them indoors. This goes for deer and antelope heads as well. Even if you are in an area that has a low chance of a person taking your trophy it doesn’t mean the neighbor’s dog or the resident coyote won’t swoop in and grab your buck in the middle of the night, never to be seen again. Consider them just the same as a stack of Benjamins sitting out on your front porch. Don’t take the chance, always keep them locked up.