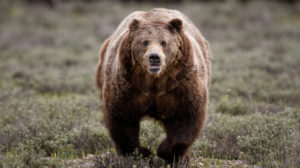 Last Saturday, October 15th was a fateful day in the mountains of northwestern Wyoming for a pair of college wrestlers who decided to do some outdoor recreating south of Cody. Kendall Cummings and Brady Lowry were looking for shed antlers and enjoying the gorgeous fall weather with two other teammates when the afternoon took a turn for the worse.

Lowry was the first to be attacked by an unseen grizzly that was concealed in heavy willows. He recounted that the bear was on him too quickly for bear spray to be deployed. As the bear mauled Lowry, Cummings entered the fray, attempting to push the bear away from his friend. Unfortunately, his brave actions only served to turn the bruin’s attention upon him and he was subsequently savaged as well.

With help from their fellow wrestlers and a local hunter, the two young men made it off the mountain and were rushed to medical treatment in Cody and Billings where they each have undergone several surgeries but are recovering.

This one hits home… Those young men wrestle for Northwest Community Community College right here in Powell, Wyoming, not but a few blocks from the office I sit in as I write this blog. Their mauling happened in an area I frequent as well, sometimes with my wife and children. Honestly, when the headlines for this started appearing yesterday and today my blood ran cold.

We’ve had a remarkably quiet bear encounter season this year. In fact, most outfitters and hunters I’ve spoken with have claimed how little bear sign they’ve been seeing and how conflicts seem to be down overall. I hope this attack isn’t the beginning of a series. General deer and elk seasons are underway in grizzly country as we speak and this always increases the likelihood of encounters and altercations with grizzly bears.

While there is no way to avoid all bear encounters in the field, some basic guidelines are helpful when navigating g-bear terrain to minimize the chance of conflict while hunting this fall.

None of the above is to say the boys did anything wrong. Their mauling was a tragic accident that unfortunately, is part of recreating in grizzly habitat. It does serve as yet another stark reminder of how quickly situations can escalate in the outdoors and the rapidly growing grizzly population of the Rocky Mountain West.

The entire Eastmans’ office has these two young men in our prayers and wishes them speedy and complete recoveries.