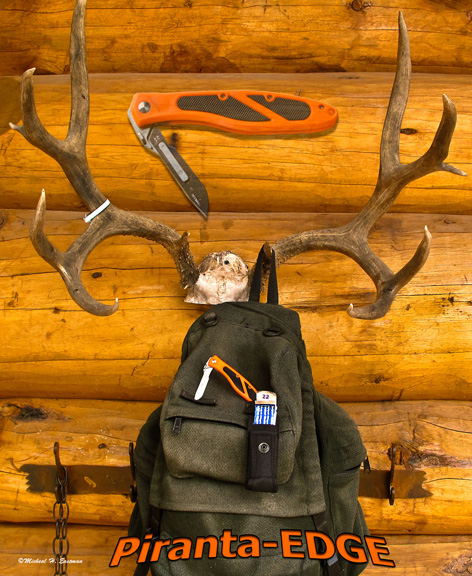 The older I get the more important it becomes to have lightweight equipment that can do the job in the backcountry. I guess as age catches up, your pack weight becomes more of an issue, so I found myself searching for innovative, lightweight gear that is multi-functional. While up in northern Canada as a teenager, I watched the natives use Russell knives with a metal file for quick sharpening. So I began packing a Canadian Russell knife in my teenage years. Then in later years while guiding and outfitting, I went to using high-end custom knives.

Now fast forward to my modern day D-I-Y pack with its manageable weight. One item to look at is the knife. I find most are heavy and have become too specialized, plus you need to pack some type of shaping tool. While doing my research on lightweight knives I ran into the Havalon Knife (www.havalon.com/the-piranta-knives.)  It’s really a practical design approach for dressing and caping. This isn’t a knife to pass down to the son. It’s a working knife.

The Havalon Knives are small lightweight and like Guy Eastman said “scary sharp!” Nate Simmons (Research Editor EBJ) has taken the Havalon’s Piranta Edge and boned out a mature bull elk with one blade. Also these knives come with several disposable blades. The sharpness is like that of a surgical knife. When it dulls, you just put in a new blade and keep on caping or dressing the animal. The cost for the knife with replacement blades is only $35.00. What a deal!

It comes in several models and blade shapes. The knife is enclosed in a black nylon case, with several replacement blades. I dropped the 4 inch knife on the scale and it weighed in at only 2.5 ounces!  I didn’t believe it, so I found another scale, same weight!  The knife style I like is the orange colored Piranta–EDGE with the Blunt Tip Blades. It’s not only excellent for caping, but also dressing and boning. The Blunt blade has a round tip that I believe is a little safer for dressing an animal in the backcountry. The orange color is another safety feature. How many times have you laid your knife down on the ground? Then spend several minutes trying to relocate it again when needed. But the bright orange makes it easy to spot on a snowy side hill or at dusk. It’s my choice.

Check out their web site. This could be the knife for anyone who wants to shed a little weight on your hip, or in your pack.