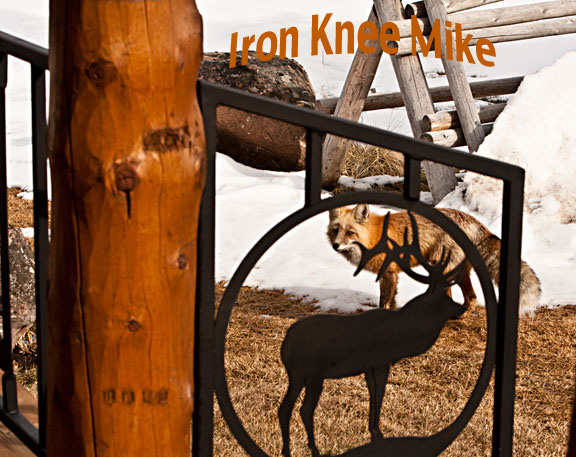 The last blog I did was just before going steelhead fishing in Idaho. Did OK, the biggest I landed was a 37-inch, native hen swinging a black leach fly. She put up quite a fight and made the trip. Shortly after getting home I checked into the hospital and went under the knife. If you have read my Hunting High Country Mule Deer book or watched me on our TV show, you know I have a bad right knee. This knee has been shot for over ten years. I was hoping that it was going to be a partial knee replacement. Well, they got inside and it turns out it was 90% bone-on-bone and covered with arthritis. The surgeon said it was bad. So off came the whole thing and now it’s iron leg Mike. In recovery I was such a pain in the ass the Doc let me out of the dungeon (hospital) a day early.

The next day even with the pain from surgery the fake knee feels better then what I was dealing with all those years. Bertie said maybe that was why I always had a frown on my face. The Doc is confident I will be able to backpack this fall. But be careful with the load. This morning while sitting out on the deck watching Bertie and the fox I noticed no pain coming from the knee! It’s a little stiff but Bertie has me in the rack making me do bends to get my range of motion back. Now three times a week I have to journey the 77 miles out of the mountains to Powell for legal knee torture. But it’s going to be worth it!

This down time gives me a chance to make up time on that new mule deer book, plus a field guide to judging trophy mule deer and antelope. It will be a small notebook style you can throw in your pack, just a pack-along field reference book for trophy judging.

As for an update on the wolves and grizzlies, neither has shown up the past month. I know the bears are out, but not on my creek. Those wolves have cleaned up all the winter kills so I think the bears are in other drainages. However, black bear season is coming up and Jack, my grandson, wants to go this spring.

Now the best for last: While I was getting sawed on in the Cody hospital, over in the Powell hospital my son Ike and his wife, Candi had the fourth generation Eastman, a granddaughter, making me a Grandfather three times over. Grandmother is having fun fussing over the little girl. Their goes my cook for a while, so will keep you posted.

I have been working on several product evaluations and will post them next go around. Good luck in the draws. Mike (Iron Knee) Eastman

Previous Lightweight Knives, Heavy Work
Next Jack and I go scouting for Blackie