Trending Posts
Home / Predator / How to Grow your Own Grizzly Bear, Legally!!!

How to Grow your Own Grizzly Bear, Legally!!! 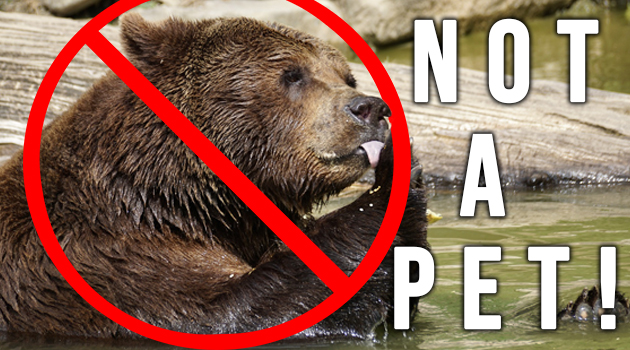 Just when you think you’ve seen and heard it all, this happens. A lady at the Solitude Subdivision in Jackson, Wyoming was reported by neighbors for feeding grizzly bears. When Game and Fish confronted this individual, whose identity has been protected, she told the wardens that they are a “bunch of wimps” and that the bears are her babies. At the base of her deck sat five grizzly bears calming munching away on grain. The bears were four sub-adult cubs and the National Park Service’s sweetheart, sow #399.

You heard that correctly, she refers to the bears as her “babies” and even more interestingly, she’s been feeding grizzly bear #399 for several years now including many sets of #399’s offspring. Officers gathered evidence that could potentially lead to a violation of the Endangered Species Act. The woman said for them not to worry because she has an “aura” that allows her to communicate with animals and not be attacked. Although if she did get attacked, she said she would be “ok” with dying.

Here’s the catch. She insists the grain is for moose, not bears. She’s simply feeding the moose and the grain is laced with medicine for what she described as conjunctivitis. Feeding moose, elk, and deer is legal in the state of Wyoming although the general public is discouraged from doing so. Over a month later the District Attorney’s office said they would have a “difficult time convicting” her of feeding grizzly bears because she stated that she placed the food for the moose, not the bears. She told the officers that the grizzly bears “came to her” when they needed help and that she administers drugs to the wildlife even though she knows it’s not legal.

The investigation was initialized when grizzly bear #962 (offspring of #399) spent two weeks in the subdivision according to a GPS tracking collar. #962 and #964 were grizzly #399’s offspring from years past and frequented the same subdivision regularly. In 2016, grizzly bear #802 (who was later destroyed) was getting into trouble and had been tracked to the same neighborhood. There are eight grizzly bears getting into feed at the Solitude home site according to the current investigation. One Solitude Subdivision board member claimed that “In my 25 years in Solitude, we’ve never had bear problems like we are having this fall and winter.” Another resident told a story of being chased in the neighborhood by a grizzly. The resident was able to run away from the bear and it eventually lost interest.

The wildlife feeder agreed to let two officers in her home, in which they noticed many dogs, cats, and rodents kept in cages. There were many cans of feed stored and the officers also reported the woman kept a collection of bear poop which was stored on cookie sheets! The officers had a two hour conversation with the lady explaining that she controlled the fate of these bears since she continuously feeds them. As of now all the Game and Fish can do is focus on education since there is nothing they can enforce.

Looking back at 2020, grizzly bear conflict was on par with years past. 49 bears were either found dead or killed in the Northern Rockies ecosystem. 28 of them were problem bears that were euthanized by officials. A total of five grizzlies were hit by vehicles. There were at least seven documented grizzly bear attacks by June 26 in 2020. Officials blame it on increased recreation outside the park because the park was closed for part of 2020 due to Covid. Interestingly enough, there were no documented attacks or deaths during hunting season, a first since 2007. So be safe out there, I fully encourage everyone to carry bear spray and a gun when out in grizzly country, leave the grain at home.