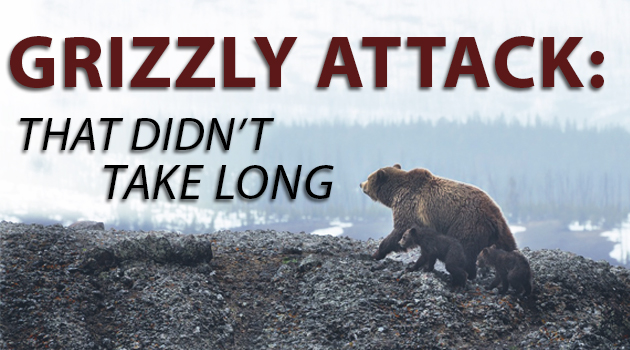 Spring is here and everyone is chomping at the bit to get outdoors and enjoy the nice weather. Shed hunting, hiking, fishing, camping, are all on everyone’s minds.

Fresh on the heels of a deadly fall hunting season in regard to grizzly bear attacks in 2018 out West, and on the heels of a liberal judge’s decision to shut down our first grizzly hunt in a very long time last fall, the first major reported story of a bear attack didn’t take long to hit the press already in the spring of 2019.

A 17-year-old out shed hunting south of Ennis, MT on April 7 was attacked by a grizzly bear and was able to deploy bear spray after being pinned to the ground by the bruin. This deterred the bear, allowing the teen to get to safety for his minor wounds to be treated.

This isn’t a good sign for the start of the 2019 field season for those of us that enjoy our country’s public lands in the Rocky Mountain West. Grizzly bear numbers are over the carrying capacity for the Greater Yellowstone Area (GYA) according to the plans laid out by the Interagency Grizzly Bear Committee and the U.S. Fish & Wildlife Service.

When people place animals’ lives ahead of the importance of human life, chaos ensues and always has. The psychologically sick individuals that sue over the delisting of a recovered species like the grizzly bear and wolf actually believe these animals to be of more importance than the sanctity of human life. These people have proven over and over again they are irrational and incapable of analyzing ALL of the facts and coming to a sound conclusion on any topic.

This isn’t a new phenomenon in human beings. Studying history books, including the Bible, it isn’t hard to see “there is nothing new under the sun.” I’m not trying to push religious hot buttons here, just illustrating that the facts from history show that when societies abandon morality, as is happening in the U.S. currently, chaos WILL ensue. Eighty-eight civilizations before us have proven it and we are following suit. This is more than a “predator death spiral” as we’ve coined the term in other blog posts here at Eastmans’. It is more accurately described as a “societal death spiral.”