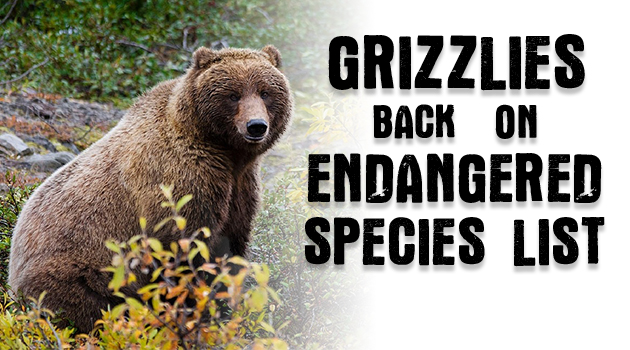 Not only did Judge Dana Christiensen cancel the Wyoming and Idaho grizzly hunts Monday, September 24th, but he also ruled that the U.S. Fish & Wildlife Service (or, “the Service”) exceeded its authority when it delisted the grizzly in the Greater Yellowstone Ecosystem. The judge then ordered the grizzly bear to be reinstated to the Endangered Species List across the lower 48 states.

The judge sided with the native American tribes and various environmental groups that brought two charges. You can read the ruling itself here: https://earthjustice.org/sites/default/files/files/2018-09-24_Doc-266-ORDER.pdf but here’s what he wrote:

(1) the Service erred in delisting the Greater Yellowstone Ecosystem grizzly bear without further consideration of the impact on other members of the lower-48 grizzly designation; and

(2) the Service acted arbitrarily and capriciously in its application of the five-factor threats analysis demanded by the ESA [Endangered Species Act].

The Court finds for the Plaintiffs on both grounds.

This is hard to swallow, especially when in the background section of his ruling he actually quotes without disagreement the USFWS findings that, “The six ecosystems [where the Service has focused on grizzly recovery] are geographically isolated from one another, and there is no evidence of interbreeding. The Greater Yellowstone population’s closest geographic neighbor is located in… [Montana]…’[T]here is currently no known connectivity between these two grizzly populations.’”

So, how does he acknowledge that and then rule that the Service blew it by not studying the effect of delisting the Yellowstone grizzlies on the northern Montana grizzlies?  Good question.

The judge wrote that not studying the effect on other populations violated the requirement to analyze the five factors from the Endangered Species Act (ESA). Well, here they are from pg. 12 of his ruling.

“The Service must make listing and delisting determinations according to a five-factor analysis of potential threats, considering: (A) the present or threatened destruction, modification, or curtailment of [a species’] habitat or range; (B) overutilization for commercial, recreational, scientific, or educational purposes; (C) disease or predation; (D) the inadequacy of existing regulatory mechanisms; or (E) other natural or manmade factors affecting its continued existence.”

Do you see any requirement related to that? No, neither do I. But he writes that it violates the last one, the one with the word “other.” That’s a real stretch.

This is the worst part.  Judge Christiensen writes that this case is like the 2017 Humane Society v. Zinke case. So what?

The ruling in Humane Society was that when a species (in that case, the grey wolf) goes onto the Endangered Species List (ESL) for the lower 48 states, that species must recover in the whole lower 48 states or it stays on the endangered species list. It cannot come off the list area by area.

That case was appealed, and the ruling was upheld by the D.C. federal appeals court. Applied to the grizzly bear delisting, it means that no matter how great the recovery in Yellowstone or in north-central Montana – if the grizzly has not recovered in the Lower 48 as a whole, it has to stay on the Endangered Species List. The Endangered Species List effectively becomes Hotel California – you can put species on the list any time you like but they will never leave. No amount of time will be sufficient for grizzlies to reoccupy the other 98% of their former range and multiply to 50,000 bears.

If this ruling holds it will mean that there will be no local control over grizzlies like Humane Society took it away from wolves. It won’t matter if the wolf decimates moose populations and other ungulates. It won’t matter if grizzlies continue to spread beyond wild areas and destroy livestock and have increasing negative human interactions. They’re protected nationwide.

There is a reason wildlife management is in the hands of the States and the States manage by herd areas. It is because there is too much variation to have the federal government set one rule for 3.8 million square miles.

If the states cannot manage wolf and grizzly numbers because they will effectively never leave the ESL how will you stop the increasing grizzly-human interactions as their territory continues to grow? How will we halt the skyrocketing reports of grizzlies killing livestock?  See our recent article Grizzly Crisis in Wyoming for charts on the explosion in self-defense and official “management mortality” (the government taking out problem bears).

The only way to stop either is for the States to increasingly replace hunters and take out those species through “management mortality.” This is managing by exception, not good practice.

Late Tuesday, U.S. Congresswoman Liz Cheney introduced the Grizzly Bear State Management Act. https://buckrail.com/cheney-introduces-legislation-to-again-remove-grizzly-from-federal-protection/ It directs the Dept. of the Interior to re-issue its delisting decision and prohibits further judicial review of the action. That’s one way to deal with this. Another is for the appeals court to overturn the grizzly decision. Or, the U.S Supreme Court could overturn Humane Society v Zinke or take the grizzly case after an appeals court ruling.

I’m personally not optimistic on any of these. We’ll see. In the meantime, aggressive and savvy activists have taken the advantage through the courts.

Previous Grizzly Bear Crisis In Wyoming!
Next Idaho CWD Regs- And How They Effect You!