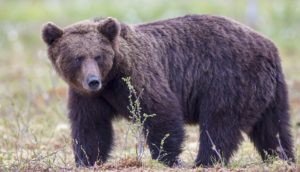 The National Park Service is reevaluating former grizzly bear reintroduction plans for the Cascade mountains in Washington state. If the plan is approved, Washington’s Cascade Mountain range will see grizzlies reintroduced to the region.

“…the plan could bring in 5 to 10 bears every year, with the hope of reaching a population of 25 — a “minuscule” number…”

Now, I could offer you an opinion filled diatribe about why or why not this is a good idea. Afterall, I live and recreate in grizzly bear country and know the realities of “coexisting” with the big bears. However, I will defer to the federal government on this one, afterall, they know best. Just look at how much the Greater Yellowstone Ecosystem is benefitting from its “miniscule” grizzly rehabilitation or its “miniscule” wolf reintroduction.

“If you protect their welfare, then the welfare of the ecosystem tends to go along with them,” Callaghy said.”

I’m sure the residents of Washington state will benefit deeply from any reintroduction of “nature’s gardeners”. The National Park Service would never make a judgment error or mistake. Do the math, follow the science…

“It probably would then take about a century to reach a population of 200 or more bears. In the greater Yellowstone region, the grizzly population was estimated at 728 in 2019, according to the Park Service.

“We hope that we get to that point where federal managers and wildlife biologists can start moving bears in here. It’s not an easy process,” Scott said. “We’d be ecstatic if we had a reasonable expectation that we’d have 200 bears in this place 50, 60, 80 years from now.”’

200 bears? A century? What happened to a population objective of a “miniscule” 25 bears? It did not take a decade for the population of GYE grizzlies to outstrip the goal of 500 bears and for those of us who live here, 728 feels like a pretty low estimate.

Don’t get me wrong, I love grizzly bears, they are spectacular animals and I enjoy having them on the landscape BUT they must be managed, just like deer, elk and wolves. And that brings us to the real issue at hand… the wholesale elimination of hunting of any kind.

Look at Petition 13 in Oregon which claims that hunting and hunters are no longer a relevant piece of wildlife management thanks to apex predator reintroduction. I’ve been saying for years that this is the endgame of the anti-hunting/environmentalist/green new deal faction, they want to end ALL hunting at ALL costs, but the North American Model of Wildlife Conservation has kept them at bay because they don’t have a say thanks to Pittman Robertson monies. Well, with the recent inclusion of these radicals in wildlife management discussions they are being legitimized and gaining ground on their goals of the elimination of all hunting and this is being done in good faith under the umbrella of inclusivity.

Well, so much for not penning an opinion piece. I’m passionate about hunting, the values it imparts, its traditions, how it benefits animals and the environment as a whole and having it around to be passed down to future generations, aka, my kids. So, if I get fired up over yet another scheme to eliminate hunting disguised as a reintroduction program or ecological diversification, you’ll have to forgive me! I was born in the 1900s and therefore don’t understand science or how the world functions.

I’ll be in the corner, discuss amongst yourselves…