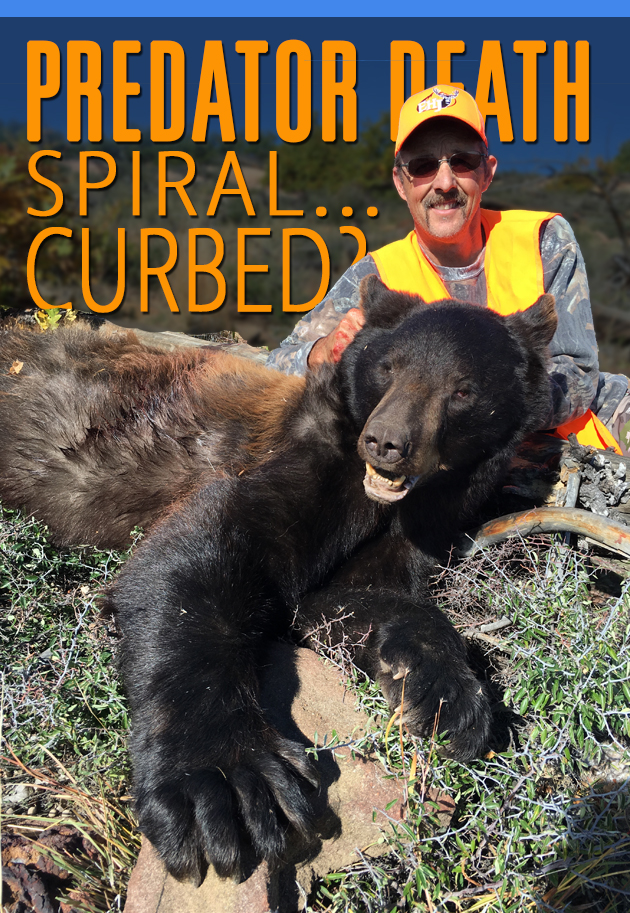 Back in mid December, the Denver Post released an article on Colorado’s Parks & Wildlife Department and their recent decision to study the effects of more aggressive predator control on the population dynamics of ungulates, primarily mule deer (Odocoileus hemionus). As we all know, Colorado has long been known as the mule deer mecca (it takes the next three states’ Boone & Crockett Records Book entries to equal Colorado’s first place standing) yet their mule deer haven’t been immune to the crash of mule deer numbers exhibited across the West in recent decades.

Years ago I worked in the wildlife management field, first with the North Dakota Game & Fish Department as a Wildlife Technician and Private Lands Biologist and then with the Mule Deer Foundation as a Regional Director and Government Liaison. My entire life has been dedicated to a driving passion I have for mule deer hunting in lonely places and I’ve often been asked about the decline of mule deer across most of their native range.

The common question I get from other concerned sportsmen is what is the number one thing affecting the mass decline of mule deer we are seeing? Is it predation, urbanization, bad winters, drought, competition with elk and other large browsing/grazing mammals, or irresponsible energy development in some cases?

The answer is a simple one…YES! The fact of the matter is that if mule deer were only facing one or two of these adversaries, we wouldn’t be having this discussion. Mule deer, like many species of wildlife, have adapted to finite changes and disruptions to their lifestyle for their entire existence. For the last several decades, however, we have seen the “perfect storm” for these icons of the West.

In the article from the Denver Post it was reported that many wildlife groups (anti-hunting groups, mind you) including the Sierra Club, Humane Society and Wildearth Guardians were against this aggressive predator control and cited out of control urbanization and energy development as the primary cause of the mule deer decline in Colorado. While these factors are indeed to be taken into consideration, I find it the ultimate in irony that these same “conservation groups” and the people making up their membership cite urbanization as a primary factor in the loss of key habitat for mule deer, especially on the winter range, yet they are comprised of tens of thousands of people who have relocated themselves to places like Colorado to get their own “Rocky Mountain High” and be “one with nature”. If that isn’t the pot calling the kettle black, I don’t know what is.

The Colorado Parks & Wildlife needs to be applauded for taking the first of hopefully many aggressive approaches to predator management. In our era of extreme political correctness this is a breath of fresh air. I’ve personally witnessed other state wildlife management agencies who have not been so bold, either due to political pressures or naivety, and their big game populations and small game populations have plummeted because of it.

Take South Dakota for example. Their mountain lion (Puma concolor) population has been so out of control for so long that a land historically rich in mule deer is desolate thereof in our current day. In fact, the mountain lions (which kill a deer or elk a week on average) in the Black Hills have eaten themselves out of house and home and one could not even find a member of their primary food source (the porcupine) if one’s life depended on it! A decade ago conservative estimates of 200+ cats were thought to have been living in the Black Hills. If those 200 cats are killing a deer or elk a week, it doesn’t take a mathematician to quickly figure how many big game animals lost their lives to these efficient predators in just one year’s time – over 10,000!!! In addition, South Dakota’s mountain lion population is so large that the cats are traveling long and far to find new homes and new food. One radio collared cat traveled all the way to northern Minnesota and set up shop. The cats have relocated to many other surrounding states including Wyoming to the West.

This is just one example from across the West of the sheer devastation that predators have on big game herds when they aren’t managed. Nobody is saying they need to be extirpated. Sound wildlife management and land management principles exist to ensure the conservation of all wildlife species – not the management of one set of species, that is glorified on coffee mugs and as stuffed animals in tourist traps and national parks as cute, cuddly creatures, to the detriment of everything else in their paths. There is a reason predators are painted in a bad light in the age-old fairy tales we’ve all grown up with (Little Red Riding Hood and The Three Little Pigs, for example) – because they are devastating to other wildlife and man if left unchecked. A fact that urban America has definitely forgotten.

As Colorado Parks & Wildlife knows, however, predator management isn’t the only silver bullet to fix the mule deer decline. The loss of habitat due to urbanization and irresponsible energy development has merit as a topic and cannot be ignored. Urbanization is the scariest one. Energy development can be reclaimed and often is in the oil and gas industries, but housing developments are forever. Once new houses, golf courses and ski resorts move in you can kiss that habitat goodbye. Mule deer are simply running out of places to go. Throw in a nationally expanding and thriving elk herd (which does not coexist with mule deer symbiotically) plus predator numbers at record levels in our lifetimes with a bad winter and/or summer drought in the mix and you have the recipe for a disaster, which is what we’re witnessing with our country’s mule deer herds.

As I mentioned in the 2015 Colorado MRS in EBJ i88, Colorado’s mule deer population has declined 39% between 2004 and the timing of that write-up. Kudos to Colorado for now taking an aggressive approach in the right direction in the face of extreme criticism from the uneducated environmental extremists, i.e. the false prophets of the conservation world. I hope they utilize this and other land protection opportunities they can cooperate with private landowners and other agencies on to bring back Colorado mule deer to the legendary status they have been known for. We hunters, the true conservationists who have willingly contributed hundreds of billions of dollars since the early 1900’s and have passionately developed what is now known as the North American Model of Wildlife Conservation, are depending on it. As my favorite President of the United States, Theodore Roosevelt said, “Wildlife and its habitat cannot speak, so we must and we will.”

P.S. Make sure you subscribe Eastmans’ Hunting Journal and Eastmans’ Bowhunting Journal. We just went to print with our 100th issue of EBJ and the MRS season is in full swing!

Don’t miss the latest episode of Eastmans’ Elevated! Press play below to listen, or download every episode on Itunes or Google Play!