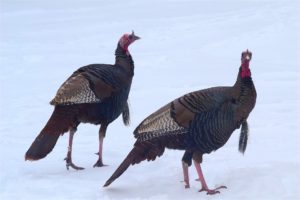 Arizona’s deadline to apply for spring turkey hunts is Tuesday, October, 11. Some quick thinking and careful planning now can yield extra days in the turkey woods down the road. Arizona is not widely known as a turkey destination, but the state does offer opportunity to hunt three different species.

The three species in the state (listed by size of their population) are Merriam’s, Gould’s and Rio Grande. Nearly all permits are issued through a draw process with two different season options available for each hunt unit. First season hunts typically start at the end of April with second season following one week later. Both seasons then re-open for two weeks in mid-May.

Gould’s turkeys are limited to southern portions of the state and begin one week later than Merriam’s seasons. The limited number of Gould’s tags and a lack of other opportunities in the U.S. make this a highly desired hunt and draw odds reflect that. In recent years even Merriam’s hunts have increased in popularity and some now may require 3-4 bonus points to guarantee a tag.

Merriam’s densities in Arizona tend to be pocketed, especially along canyons. Most of the state’s population inhabits Ponderosa pine tree stands at elevations above 6,000’. Weather is usually mild and roads are generally good. However, early hunts can encounter snow-drifted or muddy roads if late storms occur. Tag numbers are low enough to allow hunters to space out and have a quality experience.

For the lucky few hunters, Arizona will allow the unique opportunity to hunt a gobbler of the Gould’s variety. Several units in southern Arizona have sustained populations of this sub-species and offer a handful of permits each year. The most difficult portion of this hunt will be drawing the permit. Gould’s are known as very vocal and call friendly birds, which can lead to exciting hunts in the high desert.