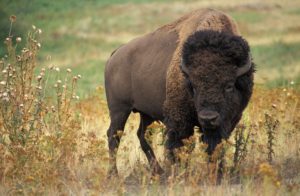 Tuesday, October, 11 is the deadline for applications to the Arizona Game and Fish Spring Draw. Included in this draw are applications for Spring (and mostly Summer) bison hunts. Each year Arizona offers the opportunity for hunter’s to pursue bison in three different areas: Raymond Ranch, House Rock Ranch and on the Kaibab Plateau in unit 12A (although the tag is good for several units, 12A holds the overwhelming majority of the bison).

The Raymond Ranch and Houserock Ranch hunts are both for a “Designated” animal. The reports I have heard from these hunts are more akin to a harvest than what we would most expect from a hunt. These hunts also offer extremely limited permit numbers and are well below any reasonable expectation of drawing.

The hunts occurring on the Kaibab in unit 12A outside of the Houserock Ranch are a completely different experience from their more domestic counterparts. A herd of several hundred free-ranging animals spends most of its time within the confines of Grand Canyon National Park. However, food and water resources inside the park are limited, and because of this, the bison often wander onto adjacent national forest where cattle tanks and salt licks are available.

When the bison leave the park and its bureaucratic protections, they can be hunted. Most commonly, hunters sit in blinds near water or nutrition sources near the park boundary, often for 12+ hours per day, and hope for a thirsty bull to wander in. The pace of the hunt is both exhausting, and agonizingly slow at the same time.

The first season with the most permits (20) opens in January, but typically snowpack on the Kaibab Plateau prevents both the hunters and bison from arriving at their designated rendezvous point at the boundary. As Spring turns to Summer, Arizona enters its driest months between Winter storms and Summer monsoon. This dry season gives the best opportunity for hunters as it is when the herd is most reliant on resources outside the park. Once the monsoon starts bison patterns become more unpredictable. For this reason the first two bull bison hunts tend to be the most productive.

An important note for Kaibab bison hunts is that the area containing bison is relatively small for the number of hunters and it is heavily outfitted. During your hunt, expect to coordinate with other hunters on where you plan to spend your time, where they will be and how to avoid disturbing each other. Because of hunter density, still hunting and motor vehicle travel near the boundary is highly discouraged.

Use the link to apply for your once-in-a-lifetime opportunity: https://draw.azgfd.com/

Previous Hold On There Cali!
Next Arizona Spring Turkey Deadline