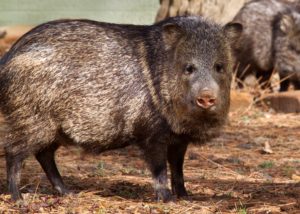 I know right now the weather in most of the country is just starting to trend cooler, but before long the days will be short and the temps below freezing. With most of hunting season right in front of us it’s tough to concentrate on application strategies and draw deadlines. However, if you want to avoid the mid-winter doldrums, some careful planning now can be your ticket to an escape in a few months. Arizona is currently accepting applications for their Spring draw which includes limited quota hunts for bison, three species of turkey (Gould’s, Rio and Merriam), and javelina. Between now and the application deadline on October 11 we will provide an overview of the opportunities each species affords. Proceeding in the order that the seasons occur, we will start with javelina.

Javelina are a bit of an anomaly in big game hunting. For most hunters they are still a low priority target and as such draw odds remain favorable in most units. Like other Western species, their popularity is rising and it’s likely that future draw odds will begin to erode as hunters begin looking for more opportunities to go afield during non-peak months. Javelina are considered big game in Arizona despite adults generally tipping the scale at less than 50 lbs. on the hoof. They are herd animals that live in groups (sometimes called a squadron) that can include up to 20 individuals. Their populations range from the desert floor to the high elevations of Arizona’s sky islands. Typically, they are hunted by glassing in juniper, chaparral or low desert habitat from high vantage points. Their limited eyesight and vocal herd interactions make them favorable targets for primitive weapons hunters who want to hunt in close proximity to their quarry.

Arizona’s javelina seasons are all available via draw except for a few urban units or fringe habitat areas. The seasons are divided by legal weapon and begin with archery hunts in January followed by Handgun-Archery-Muzzleloader (HAM) and rifle occupying the latest dates. Most hunts are relatively easy to draw and can be obtained at least every couple of years in units near Phoenix/Tucson and almost every year in more rural units. Harvest success hovers in the 30-40% range across weapon types and seasons. The big advantage to hunting archery for javelina is that the season overlaps archery deer, so with some careful planning, a combination hunt can provide multiple opportunities in a single season.

To apply for hunts, use the link:https://draw.azgfd.com/