Trending Posts
Home / General / Your Health In The Backcountry

Your Health In The Backcountry 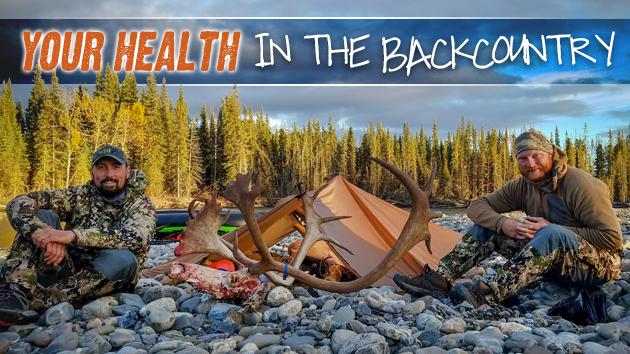 In the fall of 2017 I headed to the wilderness of Alaska to fulfill a 20-year dream of hunting caribou and moose in the largest and most remote state in the Union. A DIY float hunt was the plan and the adventure that awaited wouldn’t disappoint.

On this type of trip, one doesn’t know what to expect. What will the river character be? Will we see any animals we can harvest? If we do see the wildlife species we were after, would they be mature trophy species we dreamed of? What weather conditions would we be dealing with and how would they affect survival mode for a total of 12 days in the backcountry? However, one more question popped up as the hunt was drawing near and it didn’t have anything to do with the hunt specifically.

My friend and Alaska contact, Larry Bartlett, asked if we would participate in a health study that has never been done before. A study that would focus on the energy and caloric demands of wilderness hunters – the group that probably most closely resemble the nomadic hunter-gatherer lifestyles of certain ancient peoples.

The last question that popped in my head as we were asked to participate in this groundbreaking study was, will this study interfere with my once-in-a-lifetime dream hunt? Being someone with a biology degree, I was extremely interested in being one of the chosen “lab rats”, but it definitely couldn’t negatively impact the hunt and mission at hand.

Plus, like many backcountry hunters, I’ve always noticed extreme changes in body composition over a 5-10 day hunt where physical exertion is extreme and food is usually less than gourmet. I wanted to know exactly what is happening biologically to my muscle and fat mass. Is backcountry weight loss a product of fat AND muscle loss or is it possible to maintain and/or increase muscle mass while losing visceral fat and overall body fat under these nutrition and exertion levels?

My hunting partner, Casey Anderson (also a biologist), and I were on board with this experiment Larry informed us of. The study/experiment, conducted by Dr. Robert Coker,from the Institute of Arctic Biology at the University of Alaska Fairbanks, began two days prior to our wilderness bush flight. Dr. Coker met us at our hotel room and informed us about the use of a water based isotope and the  daily urine samples we had to take and transport with us down the river (we hereby named this adventure “Ur-ine (You’re In) Alaska”) to help measure our energy expenditure. We were also asked to keep a meal diary to track our total energy intake on this 80 river-mile float hunt.

The next day found us at the state-of-the-art University lab for a pre-hunt weigh-in, MRI scan (Magnetic Resonance Imaging) and DEXA (Dual Energy X-ray Absorptiometry) scans to measure body composition, and an oxygen-consumption measuring exercise on a stationary bike with increasing levels of resistance.

Finally! The first day of the adventure arrives and we are dropped in the Alaskan wilderness for a 10-day float hunt, 12-day total time away from civilization. As you can tell from the Beyond The Grid webisode, the adventure didn’t disappoint! (You will also notice a couple of times when Casey couldn’t resist looking at the camera and saying, “Ur-ine (You’re In) Alaska!” Needless to say there were a lot of sarcastic urine comments when traveling 80 miles of river in the wilderness and toting 12 urine vials with. Glad those Zip-Loc bags didn’t leak!!!!)

Casey harvested a dandy caribou on day 2 of the float, which meant we had several days of meat care ahead of us, leading to additional daily chores and exertion. After each morning hunt we’d tear down camp and load rafts, taking special precautions to leave no trace of our existence for future hunters floating this particular river. Each evening we’d unload rafts on a new gravel bar, make camp, and hunt until dark. Doing this for 10-12 days is just plain physically and mentally exhausting, no matter what type of shape you are in.

The day after we made it back to Fairbanks, courtesy of our trusty bush pilot, we once again checked in at the University of Alaska Fairbanks lab for the post-hunt MRI and DEXA scans, and the measurement of peak oxygen consumption during exercise. Even the initial weigh-in results post-hunt were amazing! I began the trip at my “fighting” weight of 205 lbs (I’m 6’2” tall) and had a post-hunt weight of 190 lbs. That is a weight loss of 15 lbs from a frame that was in lean-shape before the hunt even began – a weight I haven’t been at for over 20 years!!! Casey noticed similar results as well.

Several months later, Dr. Coker and his team presented and defended their findings at the annual meeting of the American College of Sports Medicine in Minneapolis, MN. They recently published the data in the scientific journal, Physiological Reports.  Here is a synopsis of the study, officially titled The Caloric Costs and Metabolic Benefits of Wilderness Hunting in Alaska:

There was a decrease in body weight, total fat mass and visceral fat volume. In contrast, total leg and arm lean tissue mass were preserved. CONCLUSION: In the context of a chronic caloric deficit elicited by over 4k calories of energy expenditure/day, adipose tissue and IHL decreased without any reduction in lean tissue mass or muscle mass. These alterations may reflect the interactive influence of movement constancy and caloric deficit on the health benefits of the hunter-gatherer lifestyle.

Here’s the Brandon Mason paraphrase: living an active hunting lifestyle is good for you! Theodore Roosevelt poetically stated, “Only he who has partaken thereof, can appreciate the keen delight of hunting in lonely lands.” Hunting and living the outdoors lifestyle is not only good for your soul, but is also great for your body. Dr. Coker’s team is actively continuing this study to further understand the demands of this type of lifestyle. We will continue to monitor the results and update you if updates are warranted.

Previous The Northern Herds: Beyond The Grid TV
Next Mountain Goat Eradication?