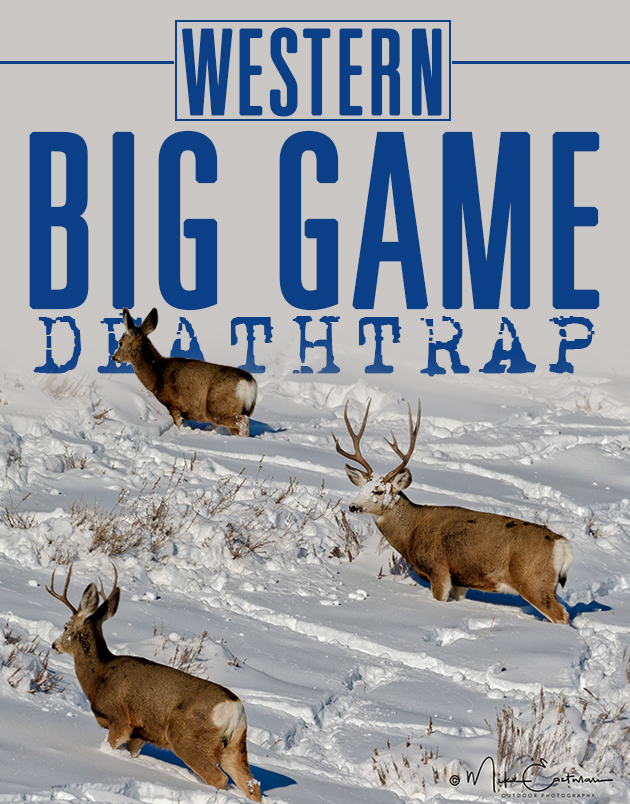 Winter’s Cold, Cruel Wrath…It’s Upon Us.

If you live out West and haven’t seen a winter like this one before, chances are you just haven’t lived long enough. The winter of 2016-2017 will likely go down as the worst winter since 1984 and may even compare to the infamously brutal winter of ’78. That means if you’re younger than 40 years old, this is probably the worst winter in your lifetime. For me, the big question now is, has the predator death spiral finally begun to accelerate beyond the control of western wildlife managers? This winter could be nearly apocalyptic for our big game populations.

Here are some quick facts to digest on the situation. Park County, Wyoming where I live, has not seen a snow and temperature combined winter this harsh since the 1920s  – that’s nearly 100 years! Jackson Hole, Wyoming is experiencing the roughest winter since 1978 and that one was a bad one. I was just a kid then, only seven years old but I remember a front-end loader coming to dig our house out. The snow was nearly seven feet deep on the level and the power went out for two days at -48 degrees.

This year has seen very consistent -20 to -40 temperatures with a massive snow load. A snow load so massive, the roof caved in on the town bowling alley and Sears store – a building that has been there for over 30 years. Down south near Evanston, Wyoming, the deer and elk herds have migrated as low as they can, to the bottom of the valley and have found refuge on high, windswept ground and on the railroad tracks where they have consequently been hit by oncoming trains.

And it’s not just Wyoming folks. The state of Utah has suspended all shed antler hunting until later this spring, a completely unprecedented move. The Utah DNR has begun a supplemental feeding program for more than 20,000 big game animals in the Northern end of the state.

Idaho has also started supplemental feeding programs and six counties in central Idaho have experienced snowfall totals that will boggle your mind. State agencies fear an up to 80% winter mortality loss for the deer herds in most of those areas. The winter has not only concentrated the big game herds to the river bottoms, but has also concentrated the predators who find easy hunting with the excessive snow loads.

Colorado is no better. The ski resorts in central Colorado have snow totals not seen in decades. One ski town reported nearly seven feet of snow in one, two-day period back in January. Supplemental feeding programs have begun there as well.

The northern mountains of New Mexico have seen the largest snow totals in over 100 years of record keeping. And of course, there’s California which has seen an entire decade of crippling drought erased in one single year. The Sierra Mountains have reported snow totals of over 20 feet, so much snow that car and home roofs are collapsing from the sheer weight of the heavy, wet coastal snow.

When I was in Sacramento in January, both Folsom Reservoir and Lake Shasta were bursting at the seams and spilling over the spillways just from the rainwater alone. Can you imagine what the spring runoff is going to bring once the Sierras begin unloading their snow pack?

As dramatic as this all sounds, the fact of the matter is we just don’t really know how the spring is going to turn out. However, based on what we have had so far, this winter is going to be one for the books and I don’t think it has done our struggling deer and antelope herds any favors. Needless to say, I think this year would be a pretty good year to play it safe and buy preference points. I know I have begun to shuffle other backup type hunts into the mix for this fall in an effort to relieve some of the pressure from my core hunting areas around Wyoming, Montana, Idaho and Colorado. To burn anything more than five preference points in Wyoming, Montana, Colorado, Utah or Idaho this year would be a huge risk and pretty unwise in my opinion. On the bright side however, historically speaking, hunters do manage to take some very large critters the fall following a bad winter – if you can manage to find one.

As of right now, mid-February has seen a very solid thaw for about two weeks now. The temperatures in Denver hit nearly 80 degrees the other day, and rain has pounded much of the upper Western states. This has no doubt given the big game herds a very nice and much needed break from Winter’s cruel wrath, but believe me, we are not out of the woods yet folks. Winter 2.0 is on its way. When this snow does freeze back up, it is going to be like concrete enhancing predator movement and crippling ungulates ability to paw for much needed food. The warm weather has been a very positive sign and we can only hope it has helped to somewhat reduce the drastic effects of the potential winter die offs somewhat.

There’s no doubt the spring in the West is going to be incredibly green and lush. The problem we face going forward is the “predator death spiral” scenario. Which will have a dramatic effect on the big game rebound in the years to come.

I have been keeping track of some very interesting studies being conducted down in Colorado. What they are finding is the fact that our predator levels are so high right now throughout the West that our ungulate populations cannot bounce back after a routine or historical die off whether it be from winter or disease. In the Colorado studies, specifically cougars, black bears and coyotes are smothering big game populations to the point where a rebound is either not mathematically possible or the length of time is so long that another weather or disease event is likely to hit before a rebound can fully occur.

And think about this for a second, Colorado doesn’t even have the wolf and grizzly bear factor to contend with in their study. Add those variables back in and you could have one of the largest wildlife catastrophes in modern history on your hands. Maybe that’s why the state of Wyoming has started to conduct public meetings regarding the winter conditions and the effect on the big game herds. The Wyoming Game and Fish already knows what the future might be holding and warming the general public up to that harsh reality is probably a good idea.

P.S. Brian Barney and Dan Pickar put out a great podcast about how to become a successful bowhunter on the #eastmanselevated podcast. Give it a listen, we know you won’t be disappointed hearing how two of the most successful bowhunters I know get it done.