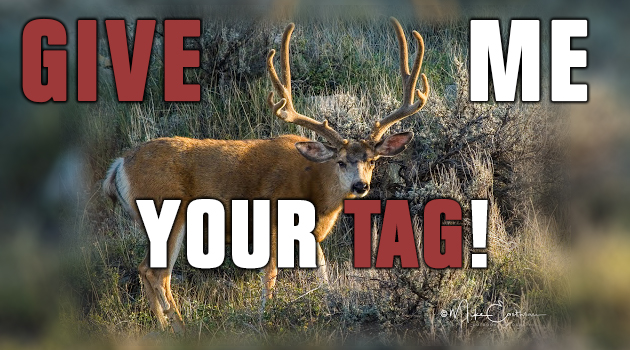 Utah wildlife biologists just unveiled their 2020 plan last week suggesting to cut over 9,000 general season deer tags. The not so bad news is there will still be 80,725 total general season buck tags available! So that’s still a good amount of opportunity if you ask me. Doe tags would also be decreased, from 2,220 to 1,175.

Premium, limited-entry, and management buck deer permits would remain the same under this proposal. Another new addition this year are HAMS hunts, similar to what we have seen in other states like Arizona. A HAMS hunt is handgun, archery, muzzleloader, shotgun only season. This calls for 15 new permits for limited-entry buck deer tags in the late season. No scopes will be allowed on any of these weapons and no hunter orange is required. We’re not sure which units will be included in this hunt but the criteria to be considered for the HAMS hunt are areas underutilized by hunters, areas with high potential of human conflict, and migratory deer populations that don’t get hunted during standard seasons. The formation of this hunt began with multiple individuals who suggested a desire for a more primitive style of hunting using less technology. I think this is great and Utah DWR has made some great moves providing more opportunities for folks across the state.

These changes are based off the fact that buck to doe ratios and fawn recruitment have declined over the past four years. Furthermore, this is based off of the state’s objective of 15-20 bucks per 100 does. Back in 2015 and 2016, the deer population was over objective so tags were increased in response to those numbers. Populations are back down to the objectives of what the state biologists set them at 5 years ago. In addition, fawn recruitment objectives set by biologists are 60 fawns per 100 does which allows for a population to grow. Currently, the state average is 53 fawns per 100 does. This leaves the state of Utah with 321,000 deer total, which is 51,000 deer less than last year.

Biologists claim the decrease was due to drought conditions in 2018 and a hard winter in 2019. The southern, southeastern, northeastern, and northern parts of the states showed to have taken the biggest hit. There will be 19 out of the 29 units that see decreases in tag allocations for the general season.

Previous What Is Eastmans’ TAGHUB?
Next Kestrel Ballistics Meter Review – How to Become a Better Shooter