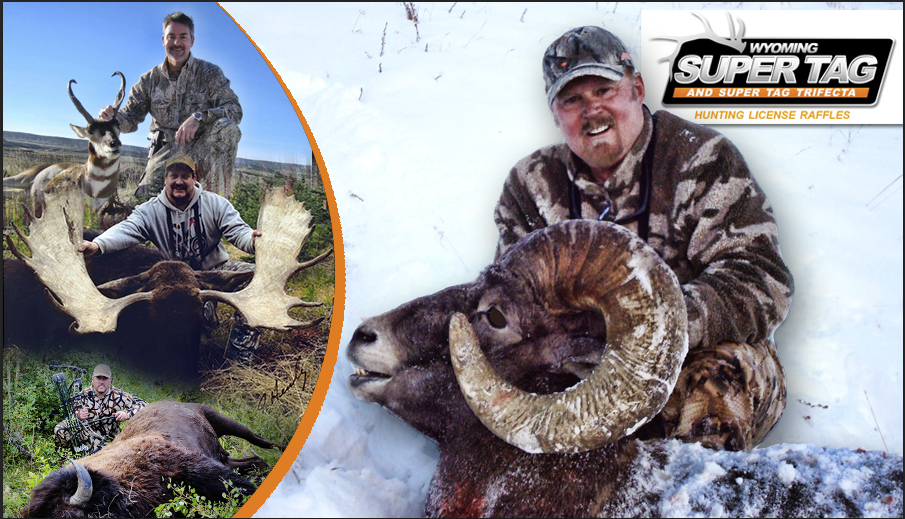 CHEYENNE, Wyoming — The inaugural Wyoming Super Tag raffle lived up to its expectations. All the winners of the big game raffle harvested animals with some being record-book and others very close.

Wyoming joined other western states in 2014 in initiating a hunting license raffle for its premier big game and trophy game species. A total of 13 licenses were available with one license each for bighorn sheep, shiras moose, elk, mountain goat, mule deer or white-tail deer, wild bison, antelope, mountain lion, wolf (no longer available due to a recent court decision related to the Endangered Species Act), and black bear. Additionally, in a separate “Trifecta” raffle, one lucky winner could choose any three licenses among those being offered. The raffle, available again in 2015, is open to both residents and non-residents.

Ben Carruthers, purchased just one ticket to win the 2014 Super Tag Trifecta raffle. Carruthers, along with his father, spent 30 days in Wyoming hunting mountain goat, bighorn sheep, and moose, taking one of each, including a mountain goat with 10-inch horns. “This was definitely an experience that will provide a lifetime of memories,” Carruthers said.

The most sought after Super Tag in 2014 was bighorn sheep. Evanston, Wyoming hunter Randall Johnston bought the lucky ticket. “It was an amazing trip,” he said. “We saw over 100 rams.” On October 28th, after 17 days of hunting, which included encounters with 19 grizzly bears and eight inches of snow, he bagged a ram sporting horns 36 inches long with 15-inch bases.

Bison Super Tag winner Daniel Hauck had one of the most exciting hunts. With an hour of daylight remaining on his first day, the Riverton archer turned around from enjoying a Teton/Snake River vista and there was a lone bull at about 1,000 yards. “Luckily there was enough timber and cover that I was able to quickly close the distance to 51 yards.” Three arrows later, he was standing over a bull that officially scored 111 2/8, which ranks second in this Pope and Young scoring period. The bison has a good chance of ranking in the organization’s all-time top 20.

Winning a Super Tag license is like a Wyoming Governor’s License – but a lot more affordable than the tags generally auctioned by organizations to benefit wildlife and conservation says Super Tag winner Jay Hensley, who took an impressive 49-inch shiras moose.

Super Tag raffle tickets are just $10, Super Tag Trifecta $30. Tickets are available January 2 to July 1 and must be purchased through the Wyoming Game and Fish Department’s Electronic License System. Winners will be notified by July 15. Raffle winners must follow all applicable dates, regulations, and laws for selected hunt areas and must purchase all applicable licenses and/or stamps before hunting. For more information about the raffle visit the Wyoming Game and Fish Department website (Link) or call of email Glenn Pauley (glenn.pauley@wyo.gov, 307-777-4673).