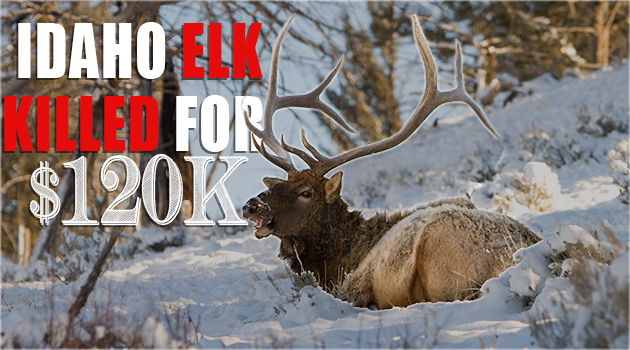 That’s right, $123,241 dollars funded by sportsmen to be precise. The other 250K (roughly) for the research/project was Federally funded. Over the course of several months IDFG (Idaho Dept. of Fish and Game) tested methods for decreasing elk depredation on crop lands across southern Idaho. During this time, IDFG staff/employees shot 206 elk, often during the night using “sharpshooting” as their primary method of dispatch.

Once the animals were shot, they were then field dressed and hauled to a freezer and eventually taken to be processed and donated to charity. After word hit social media, sportsmen and women from all over the country were up in arms asking questions such as: Why didn’t we get an opportunity to help, or why are we spending money on “research” for elk depredation issues on land that we can’t even hunt?

The Magic Valley region of southern Idaho cost IDFG (Sportsmen) $1,598,720.00 in depredation payouts. Yep, you read that correctly, 1.5 MILLION dollars. As to be expected, this raises the hackles as well as questions. Especially when most private land is NOT open to hunting and in turn, we pay those same people with closed gates for damages caused by OUR publicly owned elk. At first glance this could really stir the pot, however, IDFG has a wildlife depredation claims policy which can be found in their handbook.

IDFG clearly outlines parameters and minimum requirements that must be met prior to funds being allocated. Some of which are; landowners must take ALL responsible steps to prevent or reduce damage to their property. This is accomplished by working with IDFG to resolve the issues BEFORE crops or property are damaged. Additionally, the landowner must provide “reasonable public access” for hunting before and or as a resolution to the issue. The entire handbook outlines the roles and responsibilities, but at least we see an attempt to give the money to people that must be willing to work with hunters, which is a major prerequisite in my opinion. So, before we get all worked up thinking it’s unregulated free handouts, take some comfort in the policy behind it. Nonetheless, these are things that if left unchecked could become a major issue down the road. Especially if we the people don’t keep our hands in the mix.

Bottom line: these high dollar payouts to private landowners have prompted IDFG to investigate other processes in which they can reduce depredation caused by large ungulates, especially elk, deer and sometimes moose. Thus, IDFG decided to embark on a collaborative research study with “a University of Idaho graduate student” and test methods to help prevent or lessen the damages caused by elk predation on croplands. Whether it was completely necessary or not, IDFG stated that many of the elk were shot at night, thus the need to keep the job in house, and not open the opportunity to the public. Not that I completely disagree, but that is a hard line to draw in the sand. In addition to sharpshooting, IDFG tested the use of dogs, special fencing and spraying deterrents on crops. Results of this study will be available online at the IDFG website this coming spring/summer.