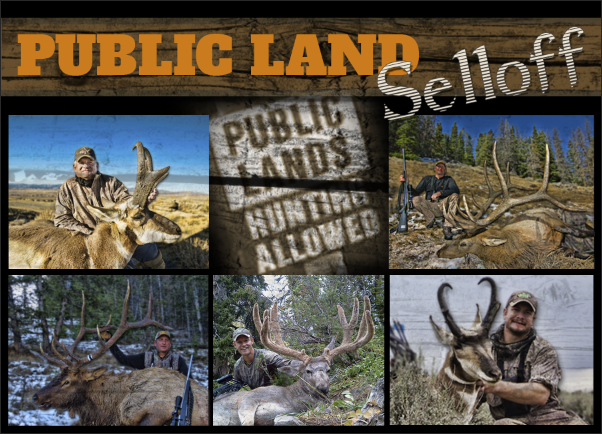 70%. Let that number sink in for a few seconds before you go on reading this. Rarely, if ever do we find majority numbers like this, and yet this number is something that our elected officials need to remember. 70% of the hunters who venture to the West hunt on PUBLIC LAND!

In the 2014 hunting season 75,772 deer tags were sold in Wyoming, meaning that approximately 50,221 people hunted on land that is held in the public trust. There were also 22,463 Wyoming non-resident deer tags sold. If I had to venture a guess, most of them hunted on public land, possibly in higher percentages than the average resident western hunters.

In office conversation last year, we started to talk about the number of public land hunts that just the people and family members of our office went on. We stopped counting at 25 trips. That isn’t to say we hunted exclusively on public land, but we did spend a LOT of time there. Mike was able to harvest an 85 inch antelope on BLM land. Yes, they still exist and are available with a little effort and patience. Dan Pickar harvested two quality bull elk on public land and Brandon Mason was 20 yards from harvesting another with Ike. Scott Reekers harvested a public land bull and Dan Turvey’s wife harvested a mule deer buck on public land. One of my favorite elk tags to draw is a public land elk hunt that I am sure if you have subscribed to our YouTube channel or watch the TV show you have seen.

But that doesn’t even scratch the surface of what the real issue here is. Every year I have the luxury of traveling to multiple trade shows and events and hearing average middle class American’s dreams to hunt public land. The vast majority of people who don’t live in the West build points for many years, save money and pick their unit based on public access. If you don’t believe me visit our forum, the number of threads that have been started based on public access to this unit or that unit is staggering.

So let’s put this into perspective just for Wyoming nonresident deer hunters. If BLM land were to disappear, that would mean every unit that had National Forest access would see application numbers shoot through the roof and draw odds squashed to below single digits. Can you imagine all 22,463 nonresident hunters applying for tags in regions G and H! If you thought point creep was bad now, just wait until the middle class can’t afford to pay trespass fees for recently sold public land. That doesn’t even account for what would happen if we lost access to the National Forests we have come to know and love.

If you think that I am talking crazy, well think again. Senator Murkowski proposed amendment 838 to the federal budget that would pave the way for selling off BLM lands, national forests, or their direct transfer to states that wouldn’t be able to afford their maintenance. The amendments first reading passed 51-49 but it had to be held open for an extra fifteen minutes to get the necessary votes. Are you ready for this Montana? One of them was your own Senator Daines, whose public professions for defending public land are very well documented. Apparently not when push comes to shove, but then our Wyoming Senators voted in favor of this as well.

If you think you had problems with landlocked parcels of public land and corner crossing before this amendment, it will likely get worse if this amendment isn’t thrown out. This is not law yet as it would have to be passed in the final budget from both houses. This vote is designed to show the intent of the Senate moving forward.  Yup, they have the intent to sell public land and now Murkowski believes she has the votes to do it. What will stop her from pushing for this in the very near future?

Add in, amendment 747 from Senator Lee which proposes selling off federal lands to pay off the national deficit and this picture only gets more grim. Can you say shortsighted? Why not ask the forest service to expedite the logging permit process to generate long-term renewable revenue? What about getting rid of the red tape that we have to jump through for a filming permit, therefore lowering man-hour costs? I’m sure each of us could go on and on about the processes that could be improved in the federal government. Selling off the land is not the solution.

Public land is held by the public, real live people, not by a senator from another state who wants to make sure that his or her pet project is funded or their donor with deep coffers is satisfied. The owners of this land are the same people who have dreamed for years of taking their children on a public land hunt in the West.

If you want to make people fighting mad, kill their dreams and their plans. The hunter from the Midwest or the East who has been building points in my home state of Wyoming should be seething mad over this! The number one reason former hunters cite for giving up hunting is a lack of access to land. Take away the public land across the West where those folks planned to spend time with family and friends and you will have issues.

Public land and its availability is something that once it is gone isn’t coming back. Never again and never for our future generations will this land be available to step into and enjoy the way we have in the past.  As I write this I can’t help but think of the children I know that won’t have the opportunity to hunt public land in the future if we lose this battle. It only makes me want to roll up my sleeves and keep on fighting. I think many of you will feel the same way, contact your Senator today and let them know you are disappointed with their short sighted plans to sell off OUR PUBLIC LANDS!

We can still stop this madness, but it will take time and effort from everyone of us, reminding our elected officials that they represent us and not the money with agendas paying for their campaigns! This budget has only passed the Senate as a continuing resolution, so make sure that you talk with your House Representatives as well as your Senators to let them know you don’t approve of their “intent.”