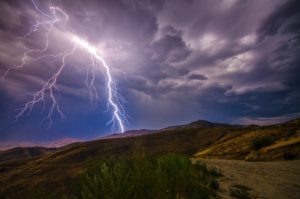 The high country has plenty of things to be afraid of, the worst of which in my humble opinion is the summer electrical storm. The high peaks and ridge lines tend to attract the high powered bolts, making them unsafe places to ride out that type of storm. There is not much worse for rattling the sanity than having the crack of lightning hitting on the same ridge that I’m glassing from. I have had the misfortune of hearing static electricity gathering on the barrel of my rifle while a storm gathered to the west of our glassing point. We left that high point immediately and got to a lower elevation as quickly as possible to avoid the greatest threat in the high country.

Unfortunately this summer on August 2, here in Wyoming two campers were not as lucky as I was on that September hunt. On a trip to Enos Lake in Teton county, one hiker was killed and another seriously injured by lightning strikes. Teton County Search and Rescue responded and were able to bring the interagency helicopter to the scene twice to evacuate the man who was killed as well as the seriously injured man. The next day two other hikers who were experiencing trauma related to the entire experience were evacuated by helicopter with two Search and Rescue personnel who had stayed with the hikers to help manage the situation.

This is a terrible tragedy that we hope doesn’t happen again. Sources available don’t provide enough information to determine if the campers were taking unnecessary risks and we won’t assume they were in the face of tragedy. We will simply let this be a reminder that there are best practices for avoiding lightning strikes. Here are a few of them:

For more on lightning strikes check out Mike Eastman’s books inside of Eastmans’ TagHub. He covers lightning in depth and how to avoid it.

All of us at Eastmans’ sincerely extend condolences to the families and friends affected by this tragedy.