Is Your Colorado Landowner Tag Valid? 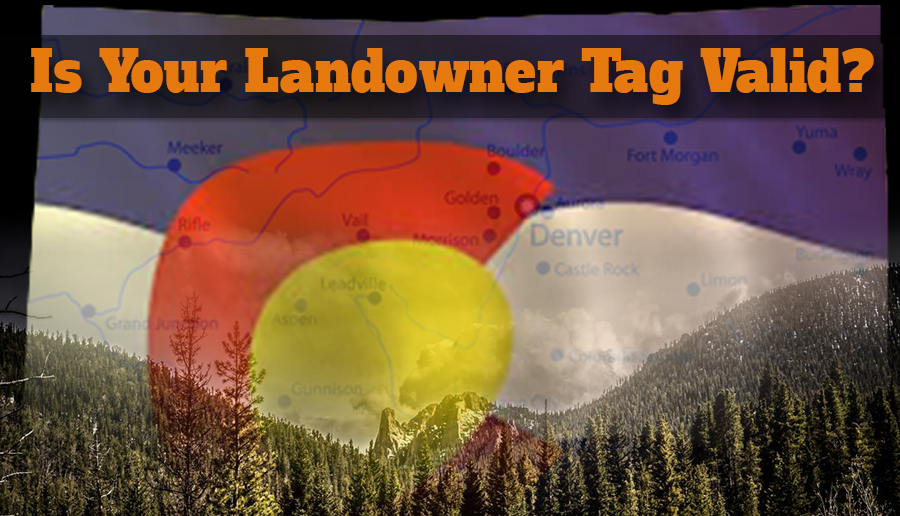 BUYER BEWARE! With the Colorado big game draw results finally posted, many unsuccessful hunters are now faced with the impending reality of looking for a landowner voucher in hopes of hunting the Centennial state this fall. If you fit into this category, like I do this year, keep in mind the Colorado Division of Wildlife has made some significant changes in structure and enforcement to the LPP, or Landowner Preference Program.

These changes could make your landowner tag invalid if the correct procedure is not followed, leaving an unsuspecting hunter guilty of poaching while hunting on an invalid license. What an unpleasant surprise that would be to find out the hard way, at a wildlife check station.

Given the new changes, we asked our resident wildlife legal expert Jason Peak to give us a quick rundown on the newly revised law, so you don’t accidentally find yourself in the “hot seat” during a standard Colorado license check this fall.

Landowner tags are controversial for the DIY hunter, for obvious and not-so-obvious reasons.  Every state in the West that has a form of landowner tag system runs their program a little differently.  Colorado just updated and somewhat overhauled their landowner tag system, and the policies behind doing so are sound and quite different than other states.  For many years Colorado had programs, pilot programs, programs applicable to certain areas and updates to older programs all going on at once.  With the new Landowner Preference Program (“LLP”), Colorado has cleaned up all the prior programs by consolidating all the best attributes into one program with the intention of achieving the end goal of encouraging landowners and hunters to work together to benefit wildlife populations.

Some felt the prior landowner tag systems were antiquated and subject to abuse.  The initial program was developed to give landowners a way to manage wildlife populations themselves by allowing them to shoot animals on their property.  Over time, landowners began selling their tags to hunters or outfitters to do the hunting and help control populations and minimize damage to agriculture.  But stories of folks taking advantage of the system began creeping in and the focus of the program shifted to holding everyone more accountable.

For landowners the new LPP focuses more on tracking the “paperwork” involved and making sure that the potential for abuse is limited.  To qualify, a landowner must own at least 160 acres of contiguous agricultural land and the land must be inhabited by a “significant number” of the species being applied for (either deer, elk or antelope) throughout the year.  The land itself must also meet certain requirements, such as it must either provide a winter habitat, food source, calving areas, transitional habitat or migration corridors.

If successful in the drawing for a landowner voucher, the landowner must agree to allow the hunter permission and access to all the land identified on the registration and application upon which the voucher was drawn for the entire season of the hunt but may limit or restrict the method of access (foot, horseback, vehicle, etc.) to reduce harm to the land.

As a hunter, obtaining the voucher from the landowner or the land manager is only the first step.  With the voucher, a hunter must then obtain a proper and valid license by redeeming the voucher prior to the hunt at any Colorado Parks and Wildlife (“CPW”) office or license agent.  Once the proper and valid license is obtained, the hunter can hunt anywhere allowed under the specific hunt code under which the voucher was obtained.  There is the misperception that licenses obtained from landowner vouchers are limited to private land.  That is not entirely correct as there are many nuances and it can get tricky trying to determine whether a license obtained from a voucher allows the hunter to hunt both public and private lands in the unit.  The most prudent approach here would be to contact CPW and follow up on the specific lands open to hunting under the specific license.

Based upon recent estimates Colorado’s lands are approximately 57% private versus 43% public.  Over the years Colorado developed landowner tag programs to not only give landowners the ability to hunt their own lands but also the incentive to maintain wildlife habitat and “tolerate” wildlife populations on their property.  The landowner tag program has developed over the years with several changes being implemented reflecting fluctuating wildlife populations, and now Colorado has the LPP that has been developed and designed through the decades to facilitate private landowner involvement in wildlife conservation and population growth.

Food For The Backcountry

Following in the footsteps of his father, Guy has taken up the reins and is now at the helm of the Eastmans’ Hunting Journal and the Eastmans’ Bowhunting Journal. A fine hunter in his own right, Guy has taken several trophy animals and has become an expert in trophy hunting as well.
Previous Antler Growth Forecast: Colorado, Arizona, New Mexico
Next The Best Defense Against Small Pests!