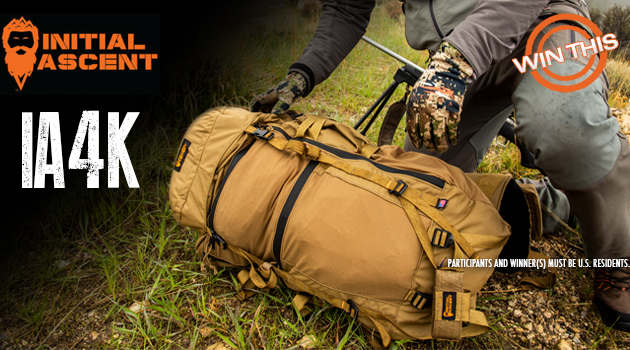 If you haven’t heard of Initial Ascent backpacks, don’t feel alone, they launched in 2018. They are a relatively new offering with a strong product straight out of the heart of Idaho. The 4000+1500 with Pannier cui pack comes in at 5.95 lbs. The rugged triaxial carbon fiber frame that by itself accounts for only 18 oz. of the pack’s weight. The bag is composed of 500D Cordura and by itself has six large pockets, four on the sides and two on the back. Two of the pockets on the sides and both on back are composed of a stretch material that will make zipping the pockets easier than say a rigid Cordura build pocket when stuffed full of gear. Sign up for this giveaway by filling out the form below. Good luck!

the rugged triaxial carbon fiber frame that by itself accounts for only 18 oz. of the pack’s weight. This surprised me as it is much more beefy than their competitors in this space that have opted for carbon fiber frames.