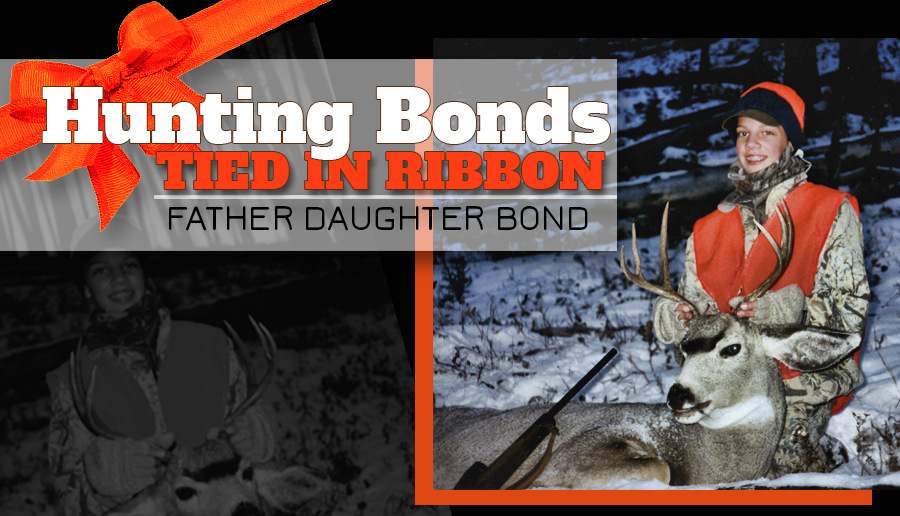 Just because a woman marries someone who hunts doesn’t mean that’s how she got her start! Take myself for example; I married a hunter but my hunting experience started long before I met my husband.

Currently, I work at Eastmans’ as the Marketing Coordinator. I’ve been hunting for as long as I can remember and started out on hunting trips with my Dad.  He has always been my hero and my favorite hunting buddy.

Dad has been a hunting guide for many years. He started in the early 1980’s when his brother-in-law moved west and started an outfitting business. He would travel back and forth during hunting seasons from New Hampshire to Wyoming. Shortly after I was born in 1990, we moved  to Wyoming so he could guide and hunt out here.

He couldn’t wait until my sister and I were old enough to  hunt with him so he could instill great ethics in us, build family memories and continue his hunting tradition with us.  A few years later I was finally old enough to go hunting for my  first mule deer in northwest Wyoming.  It was a general tag but my Dad always told me that Preparation is half the battle of the hunt. To make sure I didn’t get too amped up on shooting a big buck my first year, he reinforced that I had many years of hunting to come where I could be picky. He told me I had years to learn how to become a better,  well-rounded hunter and then I could  be the picky hunter and hunt for a big mule deer buck!

On my first hunt, we went to the mountains south of the Montana border behind a friend’s ranch. It was late in the evening on the last night of the hunt when we spotted a few deer. There weren’t any big bucks in this bunch but there was a little one and I looked at my Dad and told him, “Well I might as well shoot him – he is my first deer and of course it’s the last night of the hunt.”

Since that first hunt with Dad, it has been the norm for me to wait until the very last day of the season and the very last minute of shooting light to kill any species we might be hunting. My first mule deer hunt set the tone for my future hunts.

The funny thing is, Dad is very strategic, serious and particular about how he will go about stalking an animal. Once that animal is down – it’s all about celebrating the success of the hunt.  Every time I kill an animal whether it is deer, elk, antelope, or turkey, my Dad’s excitement is the greatest compliment  in the world. To know that my Dad is so proud of me for having another successful hunt is beyond words and we share a special bond hunting together that is irreplaceable.

Previous Knowing Your Boundaries: Using onXmaps to have the best hunt possible!
Next Sighting In Your Rifle!