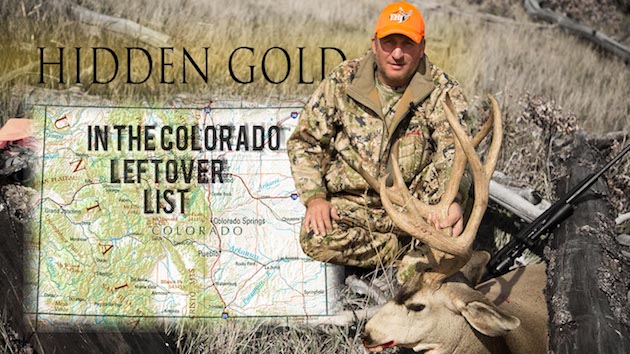 Did you know that every Tuesday at 9:00 a.m. all returned Colorado big game licenses for deer, elk, pronghorn and bear have been available for reissue to the fastest person to complete the online process, regardless of how many points they have and how many points the license originally took to draw? Up until now, you could have grabbed a returned license that originally took 15 points to draw, even if you had no points. In 2016, 53 licenses that took 10 points or more in the draw were reissued this way and a total of 4,401 licenses were reissued overall, less than 1/3 of what was available.

Getting a reissued license does not affect your preference points. The only qualification, assuming you are legally able to buy a license, is that you cannot have been drawn or bought an A-List license (almost always meaning limited antlered game) or two B-List big game licenses (usually doe or cow licenses) during that year. Details about license lists are in the front of the Colorado Big Game booklet each year. 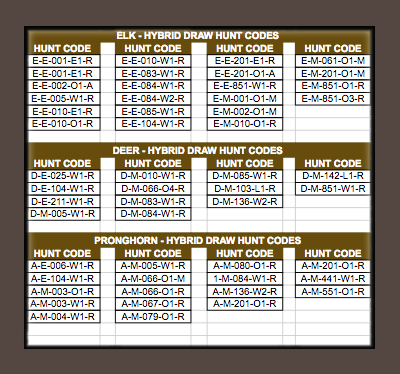 This first-come, first-served process was just changed in November and will continue as before except that on hybrid draw licenses and Ranching for Wildlife licenses the CO CPW will now contact the next person that would have drawn the license in the draw, going down the list until it reissues the tag, the same system it uses for trophy species. The few hybrid licenses are listed on page seven of the Colorado Big Game Hunting booklet and below. This is still a fantastic deal and is open to both Colorado residents and nonresidents.

Another major change is that licenses must be returned at least 30 days prior to the start of the season. Only in extreme cases like death or deployment will refunds be given for licenses returned after that time. You must choose between a restoration of preference points and a refund. There is a $15 fee.

Reissued limited and OTC with caps licenses will still NOT require the use of preference points but the reissue of a hybrid license, public RFW or trophy species license will.

The State posts newly returned licenses every Monday on a reissue list at http://cpw.state.co.us/thingstodo/Pages/BigGame.aspx. The next day, Tuesday morning, the reissue list disappears and is incorporated with the leftover list on the same page. When the clock strikes 9:00 a.m., it is every man and woman for themselves – fastest completely through the process (not just putting the tag in your cart) wins.

Make a note to yourself so that come August, you start checking the reissue list every Monday afternoon and are ready to go Tuesday morning if you find what you want. Good luck.