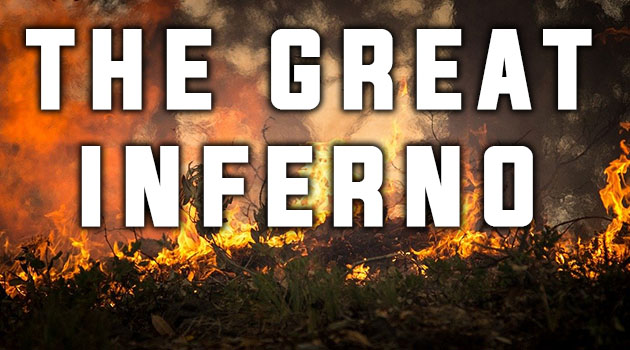 At roughly 12:46 p.m. on Saturday, June 13, 2020 the first reported forest fire of the season lit up a mountainside west of Cody, Wyoming.

This is unusual due to the fact that June isn’t exactly a peak fire month but conditions that day were ideal for a fire to spring up and spread. Ninety plus degree temperatures coupled with a bone dry landscape and high winds fanned the unknown beginnings of the blaze from the edge of US Hwy 14-16-20 south and east toward the populated valley around Wapiti, Wyoming closing the highway to public travel and calling all hands on deck to fight the fire.

Residents of Green Creek to the west of Wapiti were warned to be prepared to evacuate but in the end the only evacuations were from the Bill Cody Ranch and the Rimrock Ranch which were much closer to the fire. Horses from the Bill Cody Ranch were turned loose to escape the blaze but were later rounded up by area outfitters. There were no fatalities reported and only one minor injury suffered when a hotshot banged his head on a rock and required a few stitches.

As I write this the fire has been contained and much needed rain is quenching an already parched mountain range. That said, Forest Service leadership credits the rapid suppression and containment of the fire to the fact that, being June, there were a plethora of resources at hand to battle the flames. Had this fire broken out later in the season it’s highly likely the result would have been catastrophic as the conditions on Saturday were ripe for disaster.

As I stated earlier, the cause of this fire is unknown but the origin came from the busy highway that connects Cody to the east entrance of Yellowstone so it doesn’t take much to suspect human negligence as the cause. That said it’s a solid reminder that “only you can prevent forest fires.”

Previous B3 Hercules Duffel – Rugged Security, Organization by Eberlestock
Next Grizzlies on the Prairie