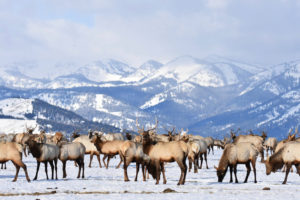 Over the past two years we’ve kept you up-to-date on the growing changes surrounding the elk feedgrounds in western Wyoming.

The public comments and meetings over this topic, in addition to the growing push for a change to the 22 feedgrounds the State administers, have brought us to the point of the Wyoming Game & Fish Department entering the next stage of development of a long-term elk feedgrounds management plan.

“After several months of shared learning sessions and input from 60 volunteer stakeholders from across the state, the department’s elk feedgrounds steering team is now beginning to draft a long-term feedgrounds management plan,” Game and Fish said. “Game and Fish intends to have a draft plan for review by stakeholders and the public this coming winter. Ultimately, the steering team would like to bring a completed elk feedgrounds management plan before the Wyoming Game and Fish Commission for their approval in the summer of 2023.”

Whether you love it or hate it, changes are coming to Wyoming’s elk feedground program. For more in-depth info on this topic, click HERE to visit the ELK FEEDGROUNDS: A CHALLENGE WE CAN TAKE on page on the Wyoming Game & Fish Department website.

To read past blogs we’ve written on this topic, click HERE.