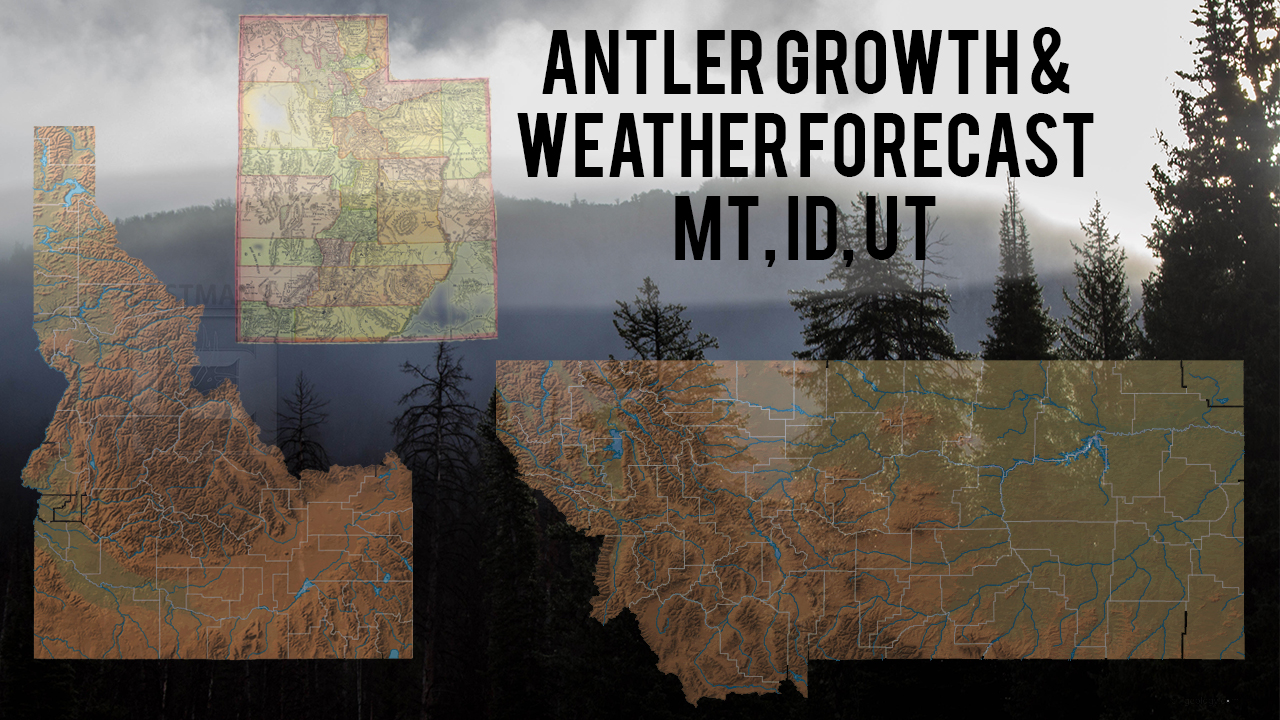 This is a year of transition in the atmosphere and the result will have major implications for hunters across the West.  We’re coming off a super-El Nino event that dominated the Pacific Ocean last fall and winter – one of the strongest on record – and could be diving right into a super- La Nina event by the time fall 2016 big-game seasons get underway.

By way of review, an El Nino event is an extended period of above-average sea surface temperatures in the equatorial Pacific.  It typically increases easterly trade winds and allows strong storm systems to roll into the West Coast of the U.S. with abundant moisture.  The storms then usually roll across the Southwest and southern states before hooking northeast up the Atlantic Coast.  The 2015-2016 event was incredibly strong and of an intensity seldom seen.  This resulted in a changeup pitch for meteorologists by bringing storms ashore farther north and moisture was abundant across Washington, Oregon, Idaho and northern Nevada.  Colorado and Wyoming got a lot of snow late, thanks to a couple of whopper snowstorms during the spring.  While the Southwest benefited from above-average precipitation last October-December and received some relief from drought conditions in the region, the bulk of precipitation during the last half of winter shifted north and left the Southwest with a deficit once again.

La Nina weather patterns across the U.S. are opposite from those of an El Nino and that’s what’s in store September through December of this year.  Most of the forecast models have us entering a La Nina event over the summer and project a strong La Nina to be in place by hunting season.  This should cause a large ridge to form in the atmosphere over the Gulf of Alaska and western North America.  That pattern would result in a cold and snowy winter from the Dakotas to the Northeast but keep weather milder and drier than average this fall west of the Rockies and south of a line from San Francisco to Denver.  Such a pattern would also mean a wetter-than-average hunting season in Washington, Oregon, Idaho and western Montana.

The last time we had a significant transition from El Nino to La Nina over a summer into fall was back in 2010.  Looking at what weather was like across the west during the 2010 hunting seasons provides partial clues about what weather may be like across the West this fall.  Taking all this information into account, here is a state-by-state look at how things are shaping up for weather to impact wildlife and antler growth across the West.

Utah:  Moderate to severe drought is expected west of I-84 and I-15 along with temperatures much warmer than average across the state during upcoming hunting seasons.  But don’t despair.  Rainfall is expected to increase during the fall across Utah and be above average October through December following a dry summer.  There is an area of the state that excites me with its potential to produce some big deer and elk this year, and that area is east of the Wasatch Range and north of I-70.  Specifically, I’m looking at places in the Uinta Mountains, the Book Cliffs and inside a triangle that runs from Provo to Green River to Gunnison.  The summer months won’t be as dry in those areas as other parts of Utah and there is going to be good early summer runoff into these areas from mountain snows to the east.  The closer you can hunt to the Wyoming and Colorado borders, the better.  That’s where the best browse will be growing.  Be advised that weather outlooks for the fall call for temperatures to average well above normal across the entire state.  But the presence of ample precipitation during the fall should help you stalk quietly.  Use scent-control camo, if possible, because you’re likely to be perspiring heavily as you navigate the high country.  Because rainfall is forecast to increase significantly during the upcoming seasons, consider toting a portable water purification system and get your water on the run.  It will reduce your pack weight and fatigue level compared to hauling a bunch of water with you.  Be certain of natural water locations in the area you’re hunting and mark them on your GPS.  Also, because water will increase in quantity during the fall, animals will have more options for their own hydration.  Staking out just one water source might lead to disappointment.  Be ready to move around and use your pre-season scouting to plan where you’ll need to be before the game animals arrive.  Success in Utah this fall should be good in the areas I’ve mentioned and also for those willing to invest some time scouting them.

Montana:  The flip from an El Nino to a La Nina weather pattern impacts some states more than others. Montana is one where the changes will be quite noticeable.  Much of last fall and early winter delivered above-average temperatures to the state.  Precipitation was also above average everywhere but the southeast corner east of the Powder River and the northwest around the Flathead Valley.  This year temperatures are expected to average above normal August through September, but then slip closer to seasonal norms October through December statewide.  Expect above average precipitation on the plains of Montana and near normal precipitation in counties along the Wyoming and Idaho borders south of I-90 and west of Flathead National Forest.  Precipitation will likely be more prevalent and in the form of snow during late hunting seasons west of a line from Glacier National Park to Yellowstone.  Remember last year the state was under the influence of a super-El Nino event, and apart from a period of record warmth in October, the weather was quite comfortable to hunt in.  Be prepared for more wild swings in the weather on this year’s hunt, especially in mountainous terrain.  La Nina years tend to mean more fall storms across the northern Rockies and it will be prudent to prepare by layering clothing, make sure you’re outfitted with a high-quality waterproof outer shell.  Conditions during the summer are forecast to be slightly above average with near normal rainfall.  Game animals should have ample food and water across the state which means solid antler growth.  At this point there is no one area that looks better than another as far as forage and nutrients needed for antler growth.  Because animals will be free to move from place to place for sustenance, you should come prepared to move as well.  Ambush tactics near water may not be as effective as spot-and-stalk methods.  Be mindful of upslope and downslope thermally induced breezes as you hunt, especially during the mild early seasons.

Idaho:  The state is known to see near to slightly above-average temperatures when La Nina patterns rule the atmosphere as they will this fall, but such conditions also produce above average precipitation across the state’s lower elevations with snow in the higher hills and mountains.  Drought conditions are now gone from the state, according to the latest NOAA data, and they are not likely to return until the La Nina event ends – which could be a year or two from this fall.  Weather through the summer will favor good antler growth and development.  It will be warm but not unbearable through the summer and game animals will have plenty to eat.  They’ll also have no problem finding water as precipitation across the state will increase when La Nina takes hold through the late summer months.  Monitor area forecasts closely as there will be potential for heavy snow to come to the high country early this fall and that should push game toward lower elevations where more rain than snow is expected.  Deer and elk will likely bed in the trees at the edges of meadows and clearings while it’s raining in order to be sheltered a bit from the rain and have a wide field of view across open areas.  If you’re up for it, here’s an admittedly strenuous but potentially profitable hunting plan.  Find where the animal you want is bedded by using good waterproof and fogproof optics.  Then backtrack and do a wide sweep to get into the area where the rain has turned to snow uphill above your animal.  You’ll need waterproof, insulated boots that deliver confident traction as you put the sneak on your trophy by coming at him downhill slowly through the timber.  Snow and moist ground will help muffle your footsteps, as will the sound of the rain in the trees.  The key to success will be intimate knowledge of the area you’re hunting so get started scouting now.  From a purely weather standpoint, I like the way things look for the finger mountain ranges northwest of the Snake River Plain.  Areas such as Ketchum, Hailey, Arco and Salmon should offer some good trophy opportunities.  I also like the way things are shaping up in the northern Panhandle around Priest Lake.  There will be some good animals to be hunted almost anywhere in Idaho this fall, but I am concerned about conditions getting too wet west of a line from McCall to Boise to Twin Falls.  Upslope winds could wring a lot of moisture out of the atmosphere in southwest and south-central Idaho this fall and that’s why I recommend the far north Panhandle and the southeast part of the state northwest of the Snake River Plain.  One last caution.  Persistent exposure to wet and cool conditions will make hypothermia a real threat this fall, especially during later seasons.  Be sure you’re outfitted for inclement and rapidly changing weather with the best hunting garments you can afford.

Previous Backcountry Safety & Rescue: Globalstar Products
Next What Happened in the 2016 WY Draw?