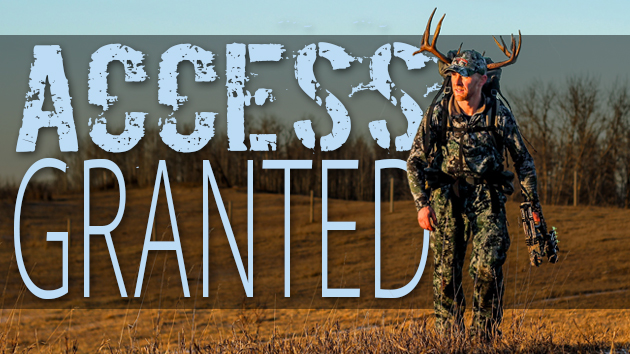 You’ve just driven past your dream hunting property for the hundredth time and you’re sure it holds some great animals, as it looks better than anything you’ve ever accessed. All the satellite images you’ve studied do nothing but get your mind blasting through all the hunts that could unfold there, but you have one problem… you’ve never asked permission and you have no clue how to tip the odds in your favor when asking.

Over the years, I have learned there are ways to help you gain favor with landowners when seeking access to their land and there are also ways to get turned down. Depending on the State or Province that you will be hunting, different laws may apply, so be sure that you are familiar with the legalities of the region you plan to ask permission in. Because of the laws in the areas I commonly hunt, it is illegal for money to be paid in exchange for hunting permission. This leaves it all up to good old fashioned relationships and respect.

While it is intimidating to pull into a stranger’s yard and ask for their blessing to spend hours, days or weeks pursuing game in what is basically their backyard, you will never gain permission unless you ask. Certain times of year and certain times of day are better choices when first introducing yourself. If at all possible, ask for permission when it’s not hunting season. Asking months in advance will allow the landowner to be at ease when you’re asking as they won’t feel that you’re planning to hunt that same day. Show up in presentable clothing and avoid being dressed in full camo with face paint on. You don’t like to be interrupted during your meals, so don’t interrupt them during theirs. By asking months ahead of hunting season, you also allow time for a relationship to be built and you can work out a form of communication that works best for them.

Spring shed season is the perfect time to be making a first impression at a prospective hunting spot. Shed hunting is non-invasive and you can gain a lot of information about a property by antlers you find and rut sign from the past fall. Simply asking for shed hunting permission and returning to the property a few times during the following weeks is a great way to start. After you have built a bit of a relationship with the landowner and they have had a chance to see that they can trust you, it’s an easy transition to ask if it would be possible to do some hunting this fall.

Most landowners don’t have a problem with hunting itself. Their problem is with the stereotype that hunters have gained through people that haven’t been respectful. Once a landowner can see that you respect them enough to ask and you care about their land enough that you won’t damage it, you are well on your way to a great long term hunting property. If you see the farmer doing some work around the farm while you’re there, offer a hand to lift things, fix fences or stack bales. It’s hard to deny permission when someone is the nicest person you’ve met.

Being willing to do extra work once an animal is down has never hurt my odds of getting a ‘yes’ when asking for the go-ahead to hunt. One of my first statements when asking for permission is,” if you’re willing to give me permission to hunt on your land, I will treat your property and fences with respect and I won’t leave any sign that I was here. If I am fortunate enough to shoot something, I will carry it out on my back and will take all the meat home to feed my family.” Those simple words are enough to prove to any landowner that they have nothing to lose by granting me access. I won’t damage fields, I won’t cut trees or fences and I will respect the land they have worked hard to own.

Remember that smiles and a positive attitude are your best assets when making your first impression.