68 Feet of Antler and Counting! 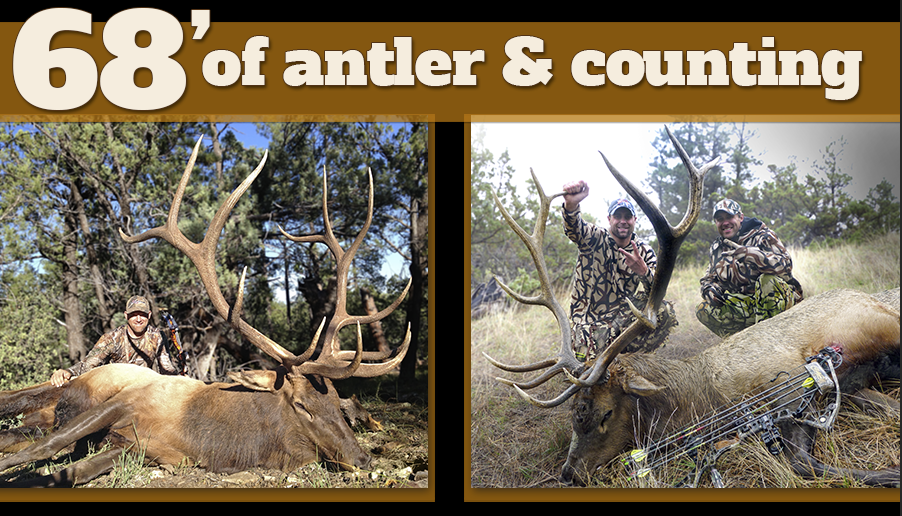 It is not often that we have content in the journals that defies the odds of what is statistically possible to kill. The past year has been one of the best for trophy quality that I can ever recall. With the quality of animals we have in the September/October issue of EBJ this issue maintains the standard and then some, which is a testament to the hunters who read this journal. 2015 has the potential to be even better!

400 inch bulls are a rarity and the hard to draw tags for areas that produce them are often less than once in a lifetime hunts. Jed Larson submitted his story about his 400 inch bull to us as well as the video to go with it. What makes this even better is that one of his friends, Ian Brimhall, had the exact same tag and managed to kill a bull of exactly the same caliber. Did we mention that Ian also got the whole thing on video?

To make the September/October issue of EBJ even better, Ben Schmidt, another subscriber, sent us his video and story from a hunt in Montana’s famous Missouri Breaks area. This issue of EBJ has three bulls that any elk hunter who has put serious effort into finding would love to hang on their wall.

This year is shaping up to be a good one in my home state of Wyoming and after watching these videos again I am having a hard time focusing here in the office this week. The start of archery elk season and the rut action heating up makes it even harder! We hope you enjoy the September/October issue of EBJ as much as we enjoyed reading your stories and watching. See all of you in the field and make sure you take the time to take great pictures of your trophies!