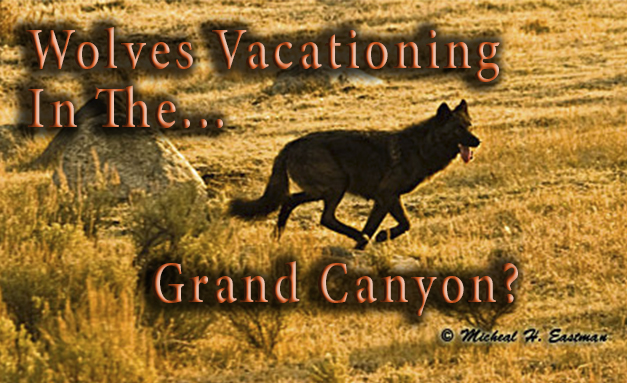 If any of you own a dog who has ever run away it will come as no surprise that a wolf from the greater Yellowstone Ecosystem has now traveled all of the way to – the Grand Canyon! To call this a well-traveled animal would be the understatement of the century, who knew they could travel that far! Oh wait, we knew that a long time ago when we worried that the animals would run back to Canada after their release from the pens they were held in for their first few weeks in Wyoming and Idaho.

Where this get’s even more interesting is in the court battle that is going to rage over protecting the animal and the travel corridors it used to reach the area. Which will inevitably show that the Mexican Grey Wolf that has been reintroduced in the Southwest is now capable of breeding with the wolf populations that were introduced to the Greater Yellowstone area in the 90’s.

Take a second, step back from your computer and let that information sink in.

Idaho and Montana are the only two states that have a hunter management plan for wolf populations. Washington, Oregon, and yup, California will likely hold out for many years before management will happen. Utah and Colorado will struggle to handle the predator but will likely have hunting seasons before most of the other states.

Arizona and New Mexico are years from a full scale comeback like the Northwest and northern Rocky Mountain West have experienced. However, it would be prudent for those states to start planning for when the management battle comes to their backyard. The better prepared the resident hunters are for the battle that is sure to come, the better the potential outcome.

Wyoming continues to fight with the green groups over their management plan and of course the predator zone designation. What intrigues me most about the predator zone is that wolves don’t seem to have any problem moving through Wyoming to states like Colorado, Arizona, and New Mexico, even with it in place.

The argument will be that this is a single wolf in Arizona and that it needs protection. It doesn’t need protection, it needs management objectives that are strictly adhered to when the time comes. Mark my words, this wolf isn’t alone and word will come in the foreseeable future that a new pack has been established in the Grand Canyon State. I wonder what the Arizona MRS will look like, how many of your hunter dollars and decades of your preference points this predator will eat?