Trending Posts
Home / Gear / What Is It With Gear Lists? Part 1

What Is It With Gear Lists? Part 1 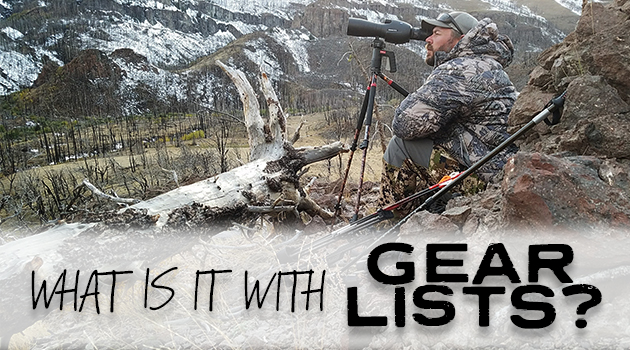 It’s kit building season until the snow melts for me and this is how I will evaluate my gear list.

In the not so distant past I was guilty of reading every gear list known to man, promptly comparing them side by side with my current Excel spreadsheet list. Then, depending on the outcome, starting five threads on the Eastmans.com forum asking if certain pieces of gear are worth the money and would salivate over current sales on said items.

Then something happened. I realized that my gear didn’t pull the trigger, nor did it power me up the hill. It didn’t practice at the range for the hard shots and it certainly didn’t have the patience required to grind out a three day scouting trip in Wyoming’s toughest country.

These are all things that are dependent on you the hunter. Glassing, being in decent condition and of course hitting the intended targets are all skills. Skills are something to be tuned and then mastered. Knowing this, I decided that it was time to categorize my gear by the skill sets required to use it and then invest money in pieces that would actually help me hone those skills.

I have the natural ability to shoot well. Things like squeezing on the exhale, target acquisition and target retention through the shot have all come naturally to me. So what pieces of this skill could I learn that would make me even better with practice?

Well, I got off the bench for starters. Learning to shoot steep angles in odd-ball positions off a bipod was at the top of my list. The biggest deer to date that ever found its way into my scope walked away unscathed due to my negligence at the range and ignorance of the effects of steep angles on bullet trajectory. That has now been remedied and I know that extreme angles have less gravitational pull, therefore they are shorter shots which equal less bullet drop. Let that sink in for a second or two as you think about the trophy you missed on a steep-angled shot.

So, where did I need to drop money to improve my shooting? My scope! Getting a top-tier scope with the appropriate reticle for my needs and then hitting the range and the hills for meaningful time behind the trigger has made all the difference!

Self admittedly, I am a meat head but my choice of physical exercise may not look like yours. The best practice for the physical rigors of a backpack or big country hunt doesn’t happen in a gym with your bros hashtagging every lift as “mountain strong” on Instagram. The best prep is beating the hills with a 35-50 lb pack on your back.

Now, I will say this, hitting the gym three to four times a week won’t hurt you, but the skills to navigate a scree slide with weight, knowing which chute is least likely to cliff out or even hold water is all acquired knowledge. And when we spend time scouting in July and August our bodies acclimate to the high country. Some of the best backcountry hunters I know never set foot in the gym, they just pound the hills relentlessly. A lot of those guys are in the 10% who kill 90% of the game category.

So where does the lifting I do benefit my hunt? It does benefit the packout and it does help with mental toughness. Overall though, when we hit the gym we are prepping for a relatively small part of the hunt, as important as the timely removal of meat from the backcountry is, so much more goes into actually finding the animals and effectively hunting them.

So what pieces of gear do I put my money into in relation to the physical rigors of scouting? Boots and backpacks. These two pieces of gear can literally make or break your hunt. Blisters on your feet can render you immobile, and hotspots on the hips and shoulders are miserable in the daily grind. Buy the most comfortable pack and boots that fit your body. Truth be told… it may not be the most expensive or trendy product, but the fit is what matters!

Previous CWD In Montana
Next Democracy In The West: Grizzly bear Management 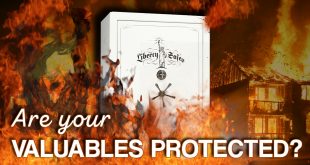 FIRE! Can your safe take the heat?! 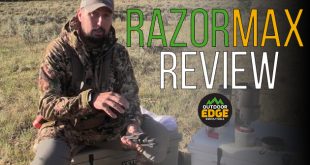 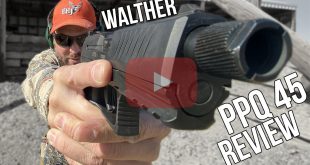 Don’t Be A Victim! Watch The Walther PPQ 45 Review

Knots, knots, knots. Growing up I learned knots at an early age. Tying … 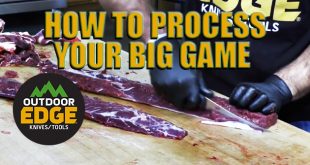 Break Down Any Big Game Animal!

Processing your own wild game animals is fun, easy and very rewarding. Not only do …