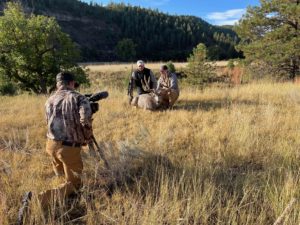 We almost all know by now that our Government lives under the rock of unintended consequences regarding ridiculous legislation. There is no more clear example than the commercial filming law introduced nearly three decades ago by Wyoming’s own Senator Craig Thomas, God rest his soul. Senator Thomas was a good legislator and like many had good intentions when he introduced the law to the Senate. This law was based on the experience his local Forest Service office had regarding a car commercial that was being filmed high above the valley floor on one of the most scenic highways in the entire country. The film crew left the area in complete disrepair once the filming was completed, costing the local office thousands of dollars to clean up and repair for the busy upcoming tourist season.

Based on that, and many other such incidents throughout the country, the Senate, House and President signed the bill giving federal and state agencies the power to require filming permits to film commercial projects. Like so many, the actual law itself was very vague and directed toward large commercial filming operations like Hollywood, large scale Television and Commercial film crews. Of course, once the bureaucratic establishment got ahold of the bill for “interpretation” the outcome was something much, much more confiningly restrictive. Many offices simply didn’t want to do the paperwork to get a filming permit approved. Some offices had no interest in letting anyone film on “their” district lands. And we even encountered some who would not approve a filming permit because they didn’t want “their own personal hunting location” publicized. It was a complete disaster in the making for most of the smaller content operators.

Before his death, Senator Thomas even admitted that his bill had been transformed into a bureaucratic swamp monster, something well beyond what its original intent was meant to be. But it was what it was for decades, and many of us did the best we could to operate inside the bounds of the law-no, easy task to say the least.

My personal dealing with this law was lengthy and daunting. At one point even discussing a possible remedy with a prominent outdoor media organization to push back in the court system based on a First Amendment violation argument. We were told by that organization’s legal representative in Washington DC that this tactic would not work and we did not fully understand the true capacity of the US Constitution. Come to find out, after all these years, I was a better lawyer than that clown.

Finally, in January of 2021 a photographer in Maine took the government to task and burned them down in a courtroom in Washington, DC. You guessed it…the law was deemed unconstitutional by Judge Colleen Kollar-Ketelly in a Federal District Court. This put the Federal Government back on their heels to say the least. The judge squashed the Secretaries of Interior and Agriculture by stating in her decision, “The government may NOT impose a charge for the enjoyment of a right granted by the federal constitution, including the First Amendment right to free expression.” And just like that the entire Federal machine was completely shut down on the overreach regarding filming on public lands. The original case was brought by the US Park Service but the final ruling ended up including all Federal Agencies and the public lands they oversee. A true win for the public.