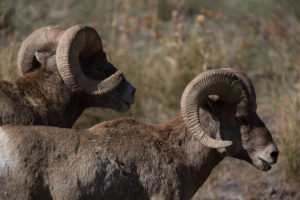 The New Mexico Department of Game & Fish (NMG&F) is beginning to finalize the next four-year rule cycle beginning April 1st, 2023. Even though the deer and elk rule cycle will not be voted on by the Commission until October, not much is expected other than the passage of the muzzleloader rule. This effectively eliminates scopes from all of the muzzleloader hunts, thereby making them a primitive weapons hunt. This basically applies to all species.

The Commission voted on and passed the exotics rule for the next four-year cycle with some minor shifts in licenses but again the major rule is the elimination of scopes on all muzzleloader hunts.

I applaud the NMG&F for standing up for all hunters and for trying to keep the status quo with the current split on the license structure, meaning 84 percent go to residents, 6 percent to non-residents and 10 percent to hunters hiring an outfitter. Especially for bighorn sheep hunters, (both Rockies and Deserts). There are some organizations that are attempting to circumvent this system by saying that the NMG&F has changed the rule to allow for more non-resident hunts. These organizations are spreading misinformation to the Game Commission which in turn has the potential to vote against the NMG&F on the next rule cycle.

Because none of the current bighorn sheep ram hunts have more than five tags by individual hunt codes, the argument by the NMWF is that all of these tags should go to residents by following the 84/6/10 split. The way that the current structure is set up by the NMG&F is that all of the Rocky Mountain ram tags and the Desert ram tags are pooled into one hunt code for each. This creates a pool of 26 Rocky Mountain bighorn sheep ram tags and 24 for the desert sheep and the existing structure allows for the 84/6/10 spit.

The good news is that the Commission voted on and accepted the current license structure as proposed by the NMG&F with the 84/6/10 split. However, this is only for the next two years for the bighorn sheep so this battle will be revisited again in the very near future.