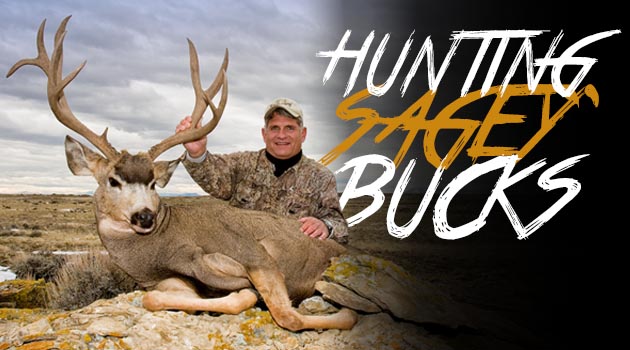 Standing with a dead rest for two hours! I was peering through a Zeiss riflescope on a Savage .270 short mag padded up and waiting on a mule deer buck. Protruding above the sagebrush flat that’s dotted with aspen groves are two, 1” antler tips. Bedded is a trophy buck hanging out until the evening dinner bell rings. Waiting on him gave me time to flash back to falls past and smart mule deer bucks that would use this terrain and cover to go undetected for many falls.

One of the smartest mule deer I have ever danced with was an old nine-year-old buck with a 7” cheater as big around as a large cigar. I spotted the buck while glassing on a lookout where I could watch miles of sage and aspens groves. At dusk the buck came out of an aspen grove and started to chow down. Suddenly just before dark thirty, over the ridge, gunfire rang throughout the valley. The old bucks head went up and he started moving down the slope to where heavy saulsberry bushes dotted the landscape.

I watched, as he would slip down a 100 yards and then stand for 10 minutes watching his back track. He did this several times before finally laying down in heavy brush. The next morning I was on the lookout glassing the area where he had disappeared into but couldn’t pick him out. He must have moved during the night out of the area! Not giving up, I glassed in a five-mile radius. Bing-go!

On the afternoon of the last day of the season I was glassing four miles from where he had disappeared. There he was feeding in the “Buck Hole” an isolated brushy pocket noted for holding bucks. At eight years old he had learned how to move around undetected!

Last fall found me on the afternoon of the last day of the season. Hum! Do we see a pattern to my buck hunting? I was again padded up with my .270 short mag on a sage flat within 200 yards of an old buck in the sage hiding from hunters. We had spotted the buck a few hours before lying with his head flat on the ground, hiding with only his antler tips sticking out of the sage. The fall before I found him hiding out in the same sage flat. It seems over the years I found in October, these bucks will move out into the sage country to use distance as a buffer from danger. And most hunters walk or drive by these buck hidey-holes for more traditional mule deer terrain to hunt.

Flashing back to this last fall hunt. That morning Guy, my son, and I were glassing from a favorite lookout. Being elevated we could overlook miles of sagebrush flats and aspen groves. In the past, this has paid off many times in locating mature bucks. From this vantage point, in the last 17 years, I’ve spotted and harvested several trophy bucks. In fact, it was common to glass up bucks from consecutive falls. And sometimes watch bucks with age become trophy quality. So it’s one of my best lookouts to locate a wary old buck.

During that morning glassing with spotting scopes, we had picked up several does and a couple immature bucks. Suddenly, Guy whispered that they were two-miles away is a good buck in the sagebrush feeding. Within a few minutes, the morning sun hit the heavy-antlered bucks back and he lay down in the high sagebrush. With cameraman in tow we worked our way down to within a few hundred yards of the flat.

The next trick was glassing up the buck in tall sagebrush. For an hour, all of us were glassing, and glassing picking apart every sagebrush.

Finally, out in front and to the left, protruding above the brush, was 2” of bone. So at 175 yards now what do you do? Walk up closer, whistle to get him up, or wait until the buck gets up to stretch? I know from experience if he spooked he was going to jump up and in one motion, take off without looking back. So I made the decision to wait while keeping the crosshairs on the tips of those protruding back tines. Sometimes the tips would move above the sage as the buck would look right and left.

Finally, after three hours! That’s right, three hours of standing, waiting and peering through that scope! With no indication, he stood up to move and “crack-pop” one shot and the buck went down. With a closer look at the buck I determined in many falls of hunting the unit, I hadn’t seen this heavy-horned buck. At eight years old he definitely lived many falls in the area without me detecting him. With nerves of steel you can bet he let many hunters walk right past at close range without jumping up out of his hidey-hole.

When hunting sagebrush and Aspen groves in mid-October try these tactics for locating mature bucks:

Keep in mind your seeking out bucks that have at least five years of hunting seasons under their belt. And these gray ghosts have found ways to use the terrain and cover to make it through the dangers of hunting season undetected. However, implementing the above tactics can accomplish finding terrain that holds trophy mule deer.

Editor’s Note: For more great tips and tactics on how to find and harvest trophy mule deer in any terrain, be sure to pick up a copy of Mike’s book, Mule Deer Hunting Tactics.