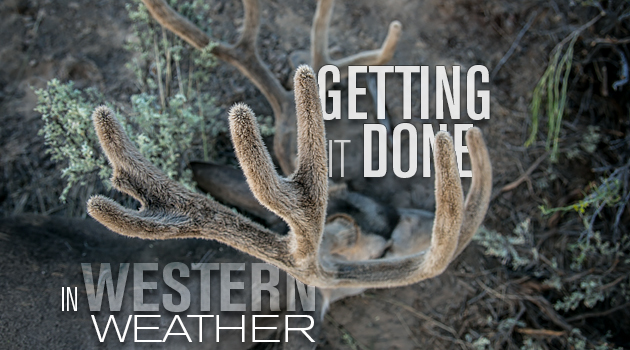 In the last four or five years, whether due simply to unseasonal weather patterns, or a more deeply rooted environmental change (that debate is better suited to Thanksgiving dinner than this article), I have hunted both Mule deer and Rocky Mountain elk in hot, sunny and dry conditions. Living in Colorado for most of the year, I am certainly used to my fair share of sunshine and warmth, but I also yearn for those colder temps and moisture that all mountain hunters rely on to get animals up and moving. However, when Mother Nature doesn’t comply with our wishes, we’ve got to dig a little bit deeper and hunt a bit differently. Here are some of the methods and things to remember that I’ve found success with.

But since we’re discussing the time period before these migrations take place, let’s focus on that. If there’s no snow, cold weather, or other unforeseen factors pushing bucks and bulls down, I’ve had excellent luck finding them right at, or well above timberline. Just because bow season has come and gone, doesn’t mean you won’t find a bruiser buck or bull in a big alpine basin waiting for your tag.

Glassing these areas usually proves easy due to the terrain and vegetation, as long as one is careful to mind the wind and his or her visibility to the animal being stalked. In the last two seasons, I’ve been with a hunting pard as he killed two good bulls almost 1,000 vertical feet above timberline in late October. The common factor in both of those hunts was warm weather (for the time of year) and a lack of heavy snows. Being up high just made sense for those elk. It’s one of my favorite rules of thumb: If you’re striking out, hike higher.

If it’s tropical out and the sun is shriveling you like an old tomato, you can bet that bucks and bulls will be heavily favoring the first and last hours of daylight to get up, stretch their legs and get their feeding in. My goal is to be glassing hard 15-20 minutes before shooting light; when you can just barely make out animals emerging from timber or brush pockets for their morning feeding.

Vantage points are paramount when utilizing this tactic too. Make sure your glassing spot is advantageous in relation to the wind (if possible) and that in hiking to it you will not be jumping animals in the dark. Glassing late in the evening is equally important. Being in your glassing spot until you can no longer see animals is absolutely crucial, even if you spot a shooter after legal shooting light has already set, chances are that animal will be close to that location in the morning and a play can be made then. Bottom line? If you aren’t glassing before light and until after it’s gone, you are cheating yourself out of the best times of the day to kill exceptional critters.

The where aspect of glassing is equally, if not more imperative, than the when to glass aspect. Areas with broken timber, grassy chutes, or edge habitat (thick timber meeting open parks, sage fields, etc), cliffs or cliff bands and aspen stands are some of the most fruitful places to glass for mature bucks and bulls.

One of my favorite methods for getting eyes on quality animals is to set up on previously scouted timber edges before first light with my binoculars and spotting scope and simply watch for movement to begin happening. This gives you the upper hand for when shooting light becomes available and allows for plenty of antler judging time. This year, my hunting buddy Kyle and I stalked down to a high timbered bench with grass below to hunt a giant buck that we had spotted very early the previous morning. As first light broke, the buck stepped out of the piney ridge and into the open for his morning feed, while we sat waiting 150 yards above. My lack of execution on the shot is a story for another time, but the method worked flawlessly. That evening, I killed a great buck on another timbered edge that we had previously seen deer in right before dark.

By hiking further and higher and taking a spike camp along with enough food to last the duration of my planned time out in the woods, I have significantly upped my own success rate.  I learned this lesson firsthand by hunting in Alaska, and it became obvious that immersing myself into fantastic hunting areas became easier when you have the ability to stay overnight comfortably. Rather than doing that leg burning 6 mile hike every day, do it once. Then, set your light spike camp up and reap the benefits of being amongst the quarry you are hunting the entire time. It will save you the time and calories of hiking back and forth from your spike camp to the area you plan to hunt every day.

I haven’t heard of somebody saying they wish they hadn’t brought their tent and sleeping bag, but I’ve heard plenty of buddies griping wishing they had brought them. In addition to changing your effort and style of hunting up, staying vigilant throughout the entire hunt is paramount to success. While I harp on the early and late glassing sessions, I have also taken two of my largest bucks during the middle of the day and early afternoon during torrid weather hunts. Take a nap or two or three between those early and late glassing times, but take the time to scan around often, too. There just might be a whopper buck or bull that got a wild hair to grab a bite to eat at 1:00PM. The truth is that while the majority of the game we take will be during the early morning and late evening, they are ultimately unpredictable, and can be found during any time of day.   Though the bull I killed this year was taken on a crummy weather day, the two weeks prior to it had been incredibly hot and bright. I hiked high into a wilderness area, and heard a bull bugle above me in an avalanche chute. He proceeded to bugle all throughout the day, and finally gave me a shot opportunity in the late afternoon. By keeping my ears and eyes open during the less productive hours of the day, I was able to capitalize on my long hike and take home a nice, mature bull.

None of these are rules written in stone. Just like any guideline, there are exceptions with a million examples. However, I and those that I know that practice the same techniques have experienced some excellent hunts and beautiful critters taken. I hope some of these suggestions might help you on your next adventure. 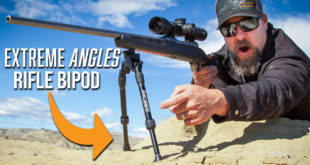 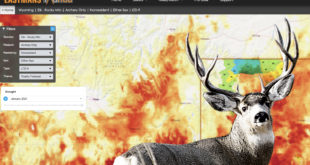 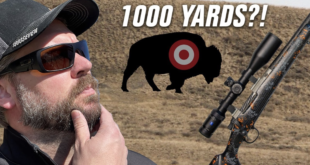