Have you ever been standing in a sporting goods store looking at the hundreds of different ammunition options and scratched your head? It’s definitely a hard choice when you look at the possibilities. Some boast about their speed, some their penetration abilities, while others brag about weight retention. On top of all that, you have to decide which one will shoot well out of your rifle. I can’t tell you what ammunition your gun is going to shoot accurately, but here is how the Hornady Superformance stacked up in a recent test.

For our test, we selected only 180-gr. factory loaded ammunition in .300 Win. Mag. and testing was done at 100 yards. Every shot was fired over the same chronograph from a new Weatherby Vanguard with a Zeiss Conquest 4.5-14 scope on it, cradled in a Caldwell Lead Sled. As a side note, Weatherby has really stepped up their game when it comes to the Vanguard. I was very impressed with its weight, great new stock, and it had a very crisp trigger-pull that rivals some of the best factory triggers available.

Velocity –
Velocity is important for a number of reasons. The faster your bullet goes the flatter the trajectory will be downrange. It can mean the difference in a dead-on aim and a couple of inches holdover at a few hundred yards. Velocity can also have a direct effect on bullet performance. Too fast and a bullet can become unstable in flight making it inaccurate. Too slow and the bullet may not have enough force behind it to penetrate and expand reliably. This is why you may get marginal results at extended ranges, because the bullet has slowed down too much.

I am pleased to say that the top performers were Hornady’s Superformance with the SST coming in first with a velocity of 3,105 fps. This isn’t much of a surprise considering speed is what the Superformance ammo was designed for.

Bullet Expansion Diameter –
Hunting bullets are designed to deform after impact. Every bullet tested here had some sort of aid; be it an exposed lead tip or a polymer tip insert that facilitated the rapid expansion and curling or mushrooming back from the tip to the base. Generally speaking, the larger a bullet is able to get after impact, the more surface/cutting area it has with which to cause damage on it’s way through. Some bullets, like the well-known Barnes TTSX or the new Winchester XP3, expand rather predictably and almost artistically, in their own right. Others, like the Hornady SST become mangled and resemble very little of their former selves. Either way, it’s not a beauty contest, but an effectiveness contest, and in this case, big is beautiful.

The Hornady Interbond was the largest expander of the bullets tested, reaching a diameter of .696 inches. When considering it started life at .308 inches, it was able to expand to nearly 2.3 times its original size! Now that is expansion. This is thanks largely in part to its bonded design which essentially fuses the lead core to the copper jacket allowing the lead to fold back over itself without breaking off. This is also what allows the Interbond to achieve high weight retention. 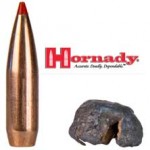 Hornady Interbond –
The Hornady Interbond has a bonded-core design which helps it deform into a beautiful slug of led while retaining a high percentage of its weight. With rapid expansion, high weight retention and the ability to grow to 2.26 times its original diameter, this bullet takes high marks in every aspect of my testing criteria. The Interbond is a force to be reckoned with and all elk better watch out if you decide to pack these around next fall. In fact, Guy Eastman used it to take his public land Wyoming elk at 350 yards last year. 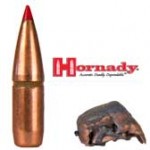 Hornady SST –
The SST was the fastest bullet/cartridge combination shot during this test by a wide margin. Combine that speed with a high B.C. gained from a polymer tips that also aids in rapid expansion, and you have a flat shooting, accurate combination. The SST also features an extra-heavy jacket and Hornady’s InterLock ring that reduces the chance of the lead core separating from the jacket. The deformed pile of lead and copper that you see in the picture may not be very pretty, but it will definitely do the trick when a bull is in your sights.

Following in the footsteps of his father, Guy has taken up the reins and is now at the helm of the Eastmans’ Hunting Journal and the Eastmans’ Bowhunting Journal. A fine hunter in his own right, Guy has taken several trophy animals and has become an expert in trophy hunting as well.
Previous Guy’s Top 5 Wyoming Elk Hunts (2014)–UPDATED 1.31.14
Next From our MRS: Application Deadlines Update–Don’t Miss Your Date