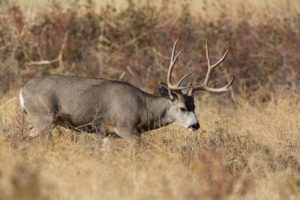 Highlights of what was discussed during the workshop follow.

Non-resident Perspective: There is no problem, support the status quo.

The Commission is considering whether to make Colorado’s allocation system look like other Western states (higher percentages for residents) or allow Colorado to continue to provide the best hunting opportunity to non-residents in the West.  And if a change should be made, how much?

They presented an excellent example of tag allocation in an Either Sex Archery deer unit with 1,000 tags. 20% (200 tags) go to landowners right of the top (a statutory requirement, no residency requirement), then another 15% (150 tags) is taken off the top for youths (this pertains to Doe pronghorn, Antlerless elk, and Antlerless & Either Sex deer). Then using the 65% / 35% distribution applicable to most units we’re left with 423 tags for residents and 227 for non-residents.  Because this example was Either Sex deer the youth set-aside applies. If it were a different hunt without the youth set-aside the final numbers would have been 520 tags for residents and 280 for non-residents. It’s the relatively low final number of resident tags that have hunters living in Colorado concerned.

Elk OTC licenses are a big part of Colorado’s license sales but for the most part aren’t offered in other western states, although some variations do exist for residents (WY General elk, Idaho Resident OTC) but not non-residents.

If other western states continue to ratchet back on non-resident opportunities Colorado may become the only game in town, potentially increasing crowding significantly.

Preference point creep is real and continuing to get worse, in some units the points required are increasing by 1 (or more) points per year.

Preference Point Banking was discussed (that’s when a hunter with a lot of points can apply for a GMU that requires less points than they have and KEEP their remaining points.)  This was tried once in 2006 but increased instability and contributed to point creep for lower point GMUs.

Group Averaging Preference Points was discussed (this is when group applications average points among all members). This could encourage hunters (or non-hunters) to buy points regardless of their intention to hunt, contributing to point creep. It could even lead to commercialization of preference points. But it could also reduce point creep if high point holders begin using their points. It was noted some other states use this system, and they seem to like it.

Hybrid Draw: In those hunt codes requiring 10 more resident points to draw (based on a 3-year average from 2007-2009), up to 20% of available licenses for deer, elk, pronghorn, and bear may be issued through a random drawing. A minimum of 5 individual points is required to participate. No group applications.

Split Draw: Used by other states. Usually not limited to a certain group of applicants, applies to most or all hunt codes, various quota percentages.

This presentation looked at the financial impacts of potential changes. They considered the implications of three changes to license distribution.

Numerous scenarios were run, the most expensive was reducing the non-resident cap for deer and elk from 35% to 20% for all hunts. The decrease in revenue was $2,347,000.

When this scenario was run, adding in pronghorn and bear the decrease in revenue was $2,311,000.

Numerous scenarios were run, one was to update the hunt code list to 2019-2021, another was to increase the number of qualifying points to 8 or 10, another was to include pronghorn and bear 80/20 hunt codes. These scenarios varied the total revenue by +/- a few 10’s of thousands … nothing significant.

Proposals are to limit archery elk OTC licenses, set quotas at 90% or 75% of 2021 sales, and apply a non-resident cap.

The Commission will be making decisions within the next 6 months. They discussed and acknowledged some hunters have spent many years and a lot of funds building preference points and that should be considered.

There are very few actions that can realistically be taken prior to the 2023 season, but the Commissioners feel they should do something because the residents want change. The Commissioners requested CPW bring the Commission some recommendations for change so they can show movement forward. For 2023, they may only be able to consider updating the 3-year averages to 2019-2021 to better reflect what’s currently happening.  In the future they may consider using 80/20 across the board for all 4 species.

Previous $74,000 For Poaching… That’s More Like It!
Next CWD Vaccination in Elk