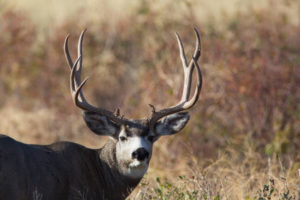 It was a tumultuous and eventful rulemaking season in early 2022 for Arizona. Among the most impactful changes were modifications made to the non-permit (OTC) tags for archery deer. During the last several years the state has seen steady increases in both tag sales and harvest from archery deer hunters. Under the previous Arizona Game and Fish Department guidelines, the increased harvest led many units to be converted to a draw only permit process. As more and more units were converted to this model, the OTC hunters were limited to fewer units and harvest became even more concentrated. Eventually this would have led nearly all units to become draw only.

To remedy this the Arizona Bowhunters Association and local sportsmen worked with AZGFD to develop a plan to establish a harvest threshold or quota for each unit. As these thresholds are met, the unit will close to archery deer hunting. This model mirrors Arizona’s system for other OTC opportunities.

What this means for sportsmen is that anyone hunting OTC archery deer will need to check online (https://harvest-tracking.azgfd.gov/) or via phone 623-236-7961 to verify that the threshold for the unit they plan to hunt has not yet been met. The harvest threshold count begins in August and applies to all three archery seasons including January. If the threshold is met during the August season the unit will not reopen during December or January. If you are planning a winter escape for warmer weather and rutting Coues’ deer, remain flexible and make sure those plans are written in pencil.

Because this is a new process and system there will likely be some bumps in the road as it is implemented. The important fact to keep in mind is that this was implemented to preserve OTC hunting opportunities in our state, and without it OTC archery deer hunting was on its way out. As you head out in the field this year be sure to double check the regulations and remain flexible as the season unfolds.

For the full list of season dates and thresholds visit this link: