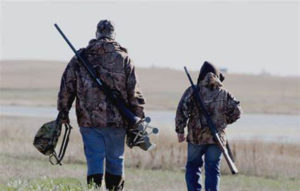 The illustrious, or rather, notorious, Gov. Gavin Newsom (slicked back hair and all) signed bill AB 2571 under an emergency order banning the marketing of guns to minors in California. He even made a video of himself holding a “JR-15,” an assault weapon akin to an AR-15 that is made for children while he proclaims, “Kids should not have one of these.”

According to the State’s Legislative Counsel’s Digest: “This bill would prohibit a firearm industry member, as defined, from advertising or marketing any firearm-related product, as defined, in a manner that is designed, intended, or reasonably appears to be attractive to minors. The bill would also prohibit a firearm industry member from using, disclosing, or compiling a minor’s personal information if it is intended to market or advertise a firearm to that minor, as specified. The bill would impose a civil penalty of up to $25,000 for each violation of these provisions…”

Rightfully so, this law is now under attack.

A coalition of sportsmen’s groups filed suit in Los Angeles seeking to block the further implementation AB 2571. They charge this new law would weaken a wide range of youth hunting and education programs in California and violates the First and Second amendments. “Law-abiding young adults have a right to bear arms and maintain proficiency in their use — rights guaranteed by the Second Amendment,” says the lawsuit, filed in U.S. District Court in Sacramento.

Hunters’ groups that filed the lawsuit said the law is misguided.

“This law is a clear First Amendment violation of speech and assembly,” said Chuck Michel, president, and general counsel of the Fullerton-based California Rifle & Pistol Association, among plaintiffs in the suit. It’s really an attempt to wipe out the next generation of hunters and shooters,” he said. “Politicians in Sacramento are not even trying to hide their disdain for the `gun culture,’ which they neither understand nor support. They want to wipe it out.”

Ben Cassidy of the Safari Club International, a Washington, D.C.-based hunters’ organization with chapters in California, says “As a community, hunters have worked for decades to provide hunter safety and education for the next generation of hunters. This law directly undermines a critical community service.”

California has enacted 100+ gun controls laws, more than any other state. However, quite frequently they are challenged in court by gun-rights groups. A federal judge blocked a 2016 voter-approved ban on high-capacity magazines, but the 9th Circuit Court of Appeals wound up affirming the law.  More recently, California’s concealed-carry law is in a tenuous position after the U.S. Supreme Court struck down a similar law in New York.

Now I don’t know about you, but I began shooting way before any “junior” weapons like a JR-15 were available. My dad cut off the stock of a .22 so I could reach my arm around to the trigger and I started practicing. While practicing, he and my grandfathers taught me all the fundamentals of gun safety so I wouldn’t harm myself or anyone else. I enrolled in the NRA Junior Program and worked my way though it from start to finish. The result of starting me young was I learned good habits, proper safety procedures, and a serious respect for guns at a young age, without developing any bad or dangerous habits. That seems like a pretty good idea and a commonsense approach to getting kids introduced to firearms.

Of course, my dad didn’t have the “luxury” of having Gov. Newsom helping him figure out how to introduce me to firearms … Thank goodness!