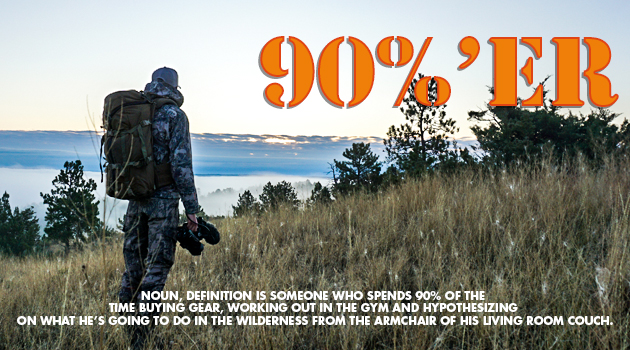 So if 10% of the hunters kill 90% of the game, what are the other 90% doing wrong? I can’t say for sure, but my friends and I have a theory on this and have come up with a saying of our own.

90%’er, NOUN, DEFINITION – Someone who spends 90% of the time buying gear, working out in the gym and hypothesizing on what he’s going to do in the wilderness from the armchair of his living room couch.

Now that you’ve read the definition, you may be wondering, am I one of these 90% guys you’re talking about? If this is the case, I’ll give you a list of things that will help point you in the direction of someone who’s a 90%’er.

Now, before some of you get your tail feathers all bunched up, keep in mind that this article isn’t meant to make fun of anyone, but more to put things into perspective when you’re planning your next hunt or preparing for the season.

So now that we’ve gotten that out of the way, let’s talk about what you can do to transform yourself from a 90 to a 10.

Get your master’s degree in animal behavioral science

Knowing your animal is probably the most overlooked and underrated aspect of hunting today. It amazes me how many hunters step into the woods with no plan whatsoever and very little knowledge of the actual species they’re after. In fact, a lot of guys don’t even know when the rut starts for elk or that there’s a second rut that occurs as well. This lack of animal knowledge is something all 90%’ers seem to have in common, but should definitely be the first step you take in going from the 90% to the 10%.

I’m lucky enough to be able to hunt all over the world for multiple species and I often get asked, “How are you able to show up in places you’ve never been and be successful?”

This answer is a lot simpler than you’d think and people are often surprised by what I tell them and I call it “The Big Four.”

Finding the different areas an animal eats, sleeps, drinks and breeds isn’t as difficult as you’d think and with Google earth and a decent amount of knowledge in map reading you can do this without leaving the house. After you’ve got a good plan of attack on where to look from you living room, it’s time to put boots on the ground and get a closer look. 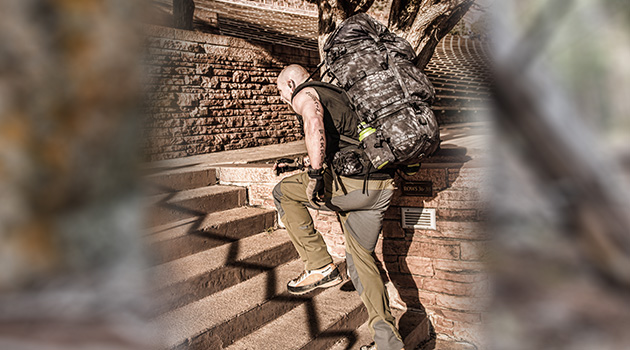 I know you can’t flex cardio, but as a former powerlifter/muscle head, I can tell you without a doubt that bench-pressing 400 lbs. will do you no good in backpack hunting. I’ve actually done everything possible in the last few years to drop all un-needed mass and muscle and transform into a “Mountain Fit Athlete” instead of a muscle head. I still hit the gym every morning, but my workout routine has evolved into something completely different than it was 10 years ago. Instead of worrying about arm size and what I can bench-press, I now focus on a strong core, mountain fit cardio and maintaining the muscles I need for hunting. I’m stressing this point because the new craze in social media seems to be spending all your time in the gym and no time in the mountains or actually learning how to hunt.

If I were to give any advice at all to someone looking at getting into mountain hunting, it would be train like a mountain hunter and not like a body builder.

Be at Home in the Wilderness

Field craft is something else that is heavily overlooked and highly useful. I’m guessing that this is because most hunters will try to purchase better gear in place of actually learning survival skills and basic woodsmanship. This doesn’t mean that you need to start snaring rabbits and squirrels for survival, but a general knowledge of what it takes to live in the wilderness is important. I’m amazed each year how many hunters I meet on the trail or in a seminar that have no idea how to build a fire or have no idea on how to read a map. Don’t get me wrong, a GPS is handy and I use one all the time, but batteries can die on you at the worst time and if you’ve never taken the time to learn orienteering, you may put yourself in a nasty situation that could have been avoided. The same can be said for using a backpacking stove; yes it’s nice to fire up the stove and have a mountain house, but fuel can run out and gear can fail, so knowing how to build a fire and what it takes to perform these tasks can be a lifesaver.

Here’s a basic list of things I would suggest you learn before you head out on your next wilderness adventure.

“Let your optics do the walking”

On a recent scouting trip I was on, the guy I was helping told me he thought we would get a better workout on the way to the glassing point we just hiked to! My first thought was that he was joking, but when I looked at him I could tell he was deadly serious. I quickly calmed myself after his comment and remembered he’d gone 0 for 7 in seven years of hunting. So I replied back as respectfully as I could with “Dude, there’s a reason you never kill anything!”

I then sat him down and explained that I packed 20 lbs. of optics in for a reason and that running around a like a chicken with my head cut off in hopes of running into something isn’t a tactic I prefer. I’m not sure that he actually listened to me but we did end up killing a 180” deer that season and we did it from using our optics and brains.

In my opinion there’s nothing more effective than sitting down and picking a mountainside apart and finding the animal you intend to kill. You can learn wear he’s eating, sleeping, drinking and depending on the time of year, you can also find out what areas they’re breeding in. All of these things would never be possible if you just walked through the woods aimlessly in hopes of jumping up some game. 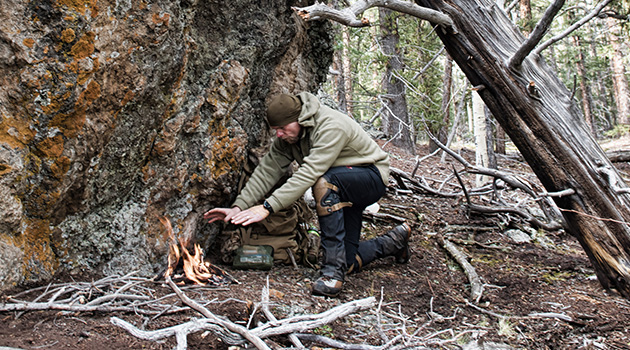 Have More Than Just an Idea

After someone has decided to head out into the unknown in pursuit of big game, you should probably do your best to make it not so unknown and come up with a plan. This plan should consist of more than just, I’m going on a 10-day backpack hunt and taking off from a pre-determined trail head, as that only gets you about 10% of what’s needed. Make sure you’ve dissected every part of the area for potential water sources, bedding areas, feeding, traveling corridors and escape routes should be a standard routine. You also need to pick out the best glassing points from which to see those areas. You should also keep in mind what’s going to be the best way to get an animal out of all the spots you’ve got listed on the map and if you’re physically capable of making it out with 100 lbs.

I could write an entire book on this subject, but make no mistake, having a strategic plan for everything you’re doing in the backcountry is going to make you a better and more successful hunter in the long run.

If you haven’t figured it out after reading this article, I talk to a lot of hunters each year that spend a ton of time talking about hunting, buying gear and lifting weights, but very little time on learning how to actually hunt and survive in the wild. So put down the dumbbells, step away from the keyboard and start the transformation from a 90%’er to that elite 10%!

Previous Gettin’ Knotty
Next What makes a 180" mule deer?