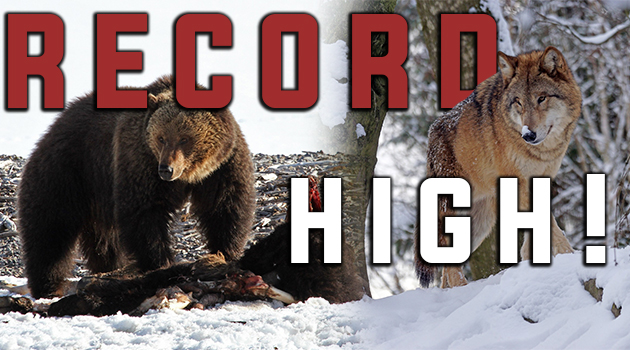 With all the buzz in Idaho surrounding the topics of depredation and government spending. We see more of the same in Montana. Although numbers pale in comparison to Idaho’s crop payouts for elk depredation, we still see a substantial up-tick in the amount of money state agencies such as the Montana Livestock Loss Board are having to dole out to ranchers due to predator impacts on livestock. This number continues to increase and has been on the rise since the introduction of the Grey wolf. In fact, the MT Livestock Loss Board was created by the state legislature to specifically address losses from wolf predation in 2007. Although much of the blame lies at the feet of these apex predators. Statistics are showing a substantial increase in Grizzly bear predation as well. Between wolves killing for food, sport and whim and Grizzlies with an appetited to back up their waistline; depredation issues are not likely to slow anytime soon. According to the Montana Livestock Loss Board they surpassed last years (2018) losses by the time deer and elk season opened in the Treasure state. And with payouts just north of $260k, 2019 marks an all-time high for the Board of Loss. We can expect to see more of the same in 2020. Additionally, the total loss to sheep farmers in Montana was pretty much status quo in 2019, however, a new statistic that catches the eye is that of depredation on sheep from bears. Out of the $2.85 million dollars in predation losses coyotes account for $1.75 million, this comes as no surprise, but the bear numbers are up by a whopping 280 percent! That means bears killed 1,400 more sheep than last year! Bottom line, predator management is key, we as sportsmen and sportswomen must continue the pursuit of conservation. This money doesn’t magically appear, it is primarily funded by hunters, yet animal rights activists continue to force introductions of wolves, block delisting of Grizzlies and place a pile lot of red tape around management criteria for state agencies. All the while, we are picking up the tab!

Previous Roll Over Teddy – Bison Culling in Yellowstone…
Next $1,000 for shooting a wolf?